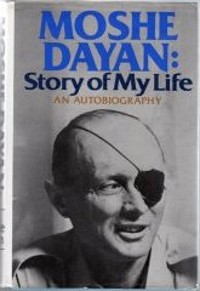 Moshe Dayan: Story of My Life

Moshe Dayan is the autobiography of a soldier who never forgot his roots as a farmer, a loner who rose to the highest echelons of government. Here he describes his kibbutz childhood, his involvement in the Jewish underground, the battles he fought as the head of a commando unit in the War of Independence, his experiences as chief of staff and mastermind of the 1956 Sinai Campaign, and his tenure as Minister of Defence during the Six Day and Yom Kippur wars. One of the greatest generals in modern history, Dayan was also a man who hated the suffering that war brings, and who loved the land of Israel more than himself. He writes of his heroes, friends and enemies, providing candid portraits of Kissinger, Ben-Gurion, Golda Meir and other notables. This is a story of a brilliant soldier who grew up to be one of the most respected and heroic figures in the Middle East.… (more)

My Life by Golda Meir
Abba Eban: An Autobiography by Abba Solomon Eban
Warrior: An Autobiography by Ariel Sharon
Diary of the Sinai Campaign by Moshe Dayan
Ben-Gurion, Prophet of Fire by Dan Kurzman
17 more
My Country: The Story of Modern Israel by Abba Solomon Eban
Personal Witness: Israel Through My Eyes by Abba Solomon Eban
My Father, His Daughter by Yal Dayan
Israel: A Personal History by David Ben-Gurion
A Certain People: American Jews and Their Lives Today by Charles E. Silberman
Bar-Kokhba: The Rediscovery of the Legendary Hero of the Second Jewish Revolt Against Rome by Yigael Yadin
The Battle for Peace by Ezer Weizman
The Israelis: Founders and Sons by Amos Elon
Memoirs: David Ben-Gurion by David Ben-Gurion
Herzl by Amos Elon
Jewish and Female: Choices and Changes in Our Lives Today by Susan Weidman Schneider
Living with the Bible by Moshe Dayan
The Jews in America by David Cohen
My Father's House by Yigal Allon
Great Jewish Thinkers of the Twentieth Century Edited with introductory essays by Simon Noveck
Great Jewish Women by Elinor Slater
The Precious Legacy: Judaic Treasures from the Czechoslovak State Collection by David A. Altshuler
Fewer