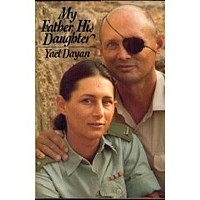 My Father, His Daughter

A life of one of Israel's greatest heroes, as seen through his daughter's eyes Moshe Dayan was one of the greatest military leaders in Israel's short history. A child of the first kibbutz movement in British Palestine, he went on to lead Israel to victory in the 1948 War of Independence and to liberate Jerusalem in the 1967 Six-Day War. Dayan was not only a soldier but a politician, an archaeologist, and a larger-than-life figure who helped shape the state of Israel.   In My Father, His Daughter, Yaël Dayan, who herself served in the Israeli Parliament, shares an uncensored look into her father's life and her own conflicted relationship with him. With poignancy and candor, Dayan creates a profound yet nuanced profile of her father. She relates his strong national pride, his boldness in dealing with other world leaders, and his troubles at home to his disintegrating marriage and multiple affairs. As revealing as My Father, His Daughter is of the man behind the myth, it is also a snapshot of a loving relationship between Yaël and Moshe Dayan, and of a daughter's admiration and respect for a complicated but loving father.… (more)

The Seventh Day: Soldiers' Talk About the Six-Day War by Avraham Shapira
Diary of the Sinai Campaign by Moshe Dayan
Moshe Dayan: Story of My Life by Moshe Dayan
Abba Eban: An Autobiography by Abba Solomon Eban
Ben-Gurion, Prophet of Fire by Dan Kurzman
21 more
Great Jews in Sports by Robert Slater
My Life by Golda Meir
The Rabin Memoirs by Yitzhak Rabin
Living with the Bible by Moshe Dayan
In Kindling Flame: The Story of Hannah Senesh, 1921-1944 by Linda Atkinson
How to Get More Out of Being Jewish even if you are not sure you believe in God, you think going to synagogue is a waste of time, you think keeping kosher is stupid, you hated Hebrew school, or all of the above by Gil Mann
Memoirs: David Ben-Gurion by David Ben-Gurion
The Hanukkah Anthology by Philip Goodman
The Siege: The Saga of Israel and Zionism by Conor Cruise O'Brien
My Country: The Story of Modern Israel by Abba Solomon Eban
I Seek My Brethren: Rescue, Relief and Reconstruction -- The Work of the American Jewish Joint Distribution Committee Ralph Goldman and "The Joint" by Tom Shachtman
The Jews in Their Land by David Ben-Gurion
Self-Portrait of a Hero: The Letters of Jonathan Netanyahu (1963-1976) by Yonatan Netanyahu
Ethical Wills: A Modern Jewish Treasury by Jack Riemer
A Certain People: American Jews and Their Lives Today by Charles E. Silberman
Golda by Elinor Burkett
Warrior: An Autobiography by Ariel Sharon
Israel Journal: June, 1967 by Yael Dayan
Zalmen, or The Madness of God by Elie Wiesel
A Jew Today by Elie Wiesel
Isaac Bashevis Singer, the Story of a Storyteller by Paul Kresh
Fewer