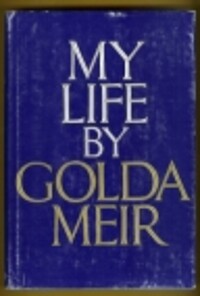 This is Golda Meir's long-awaited personal and moving story of her life. For the first time, we experience through her own words how it happened that this amazing woman, born in Russia and brought up in Milwaukee, became the prime minister of Israel and one of the political giants of our time without ever losing the warmth and informality for which she is justly celebrated. She herself describes her career as Israel's labor minister, foreign minister, and finally prime minister, against the background of her conflicting roles as a wife and as a mother. This personal story of her own life inevitably reflects also the story of Israel itself -- and of its struggle to survive -- culminating in what was for Golda Meir the most desperate period of all, the terrible days of the Yom Kippur War of 1973. - Jacket flap. The former Israeli Prime Minister recounts her life and times, describing her troubled early childhood in Russia, her years in America, her Zionist and socialist activities, and her life in Israel as wife, mother, and key political figure.… (more)

LibraryThing member ElTomaso
A well written first hand account of the formation of Israel by her "founding mother."

Moshe Dayan: Story of My Life by Moshe Dayan
Abba Eban: An Autobiography by Abba Solomon Eban
My People: The Story of the Jews by Abba Solomon Eban
Ben-Gurion, Prophet of Fire by Dan Kurzman
My Country: The Story of Modern Israel by Abba Solomon Eban
27 more
A Land of Our Own: An Oral Autobiography by Golda Meir
Golda by Elinor Burkett
A Certain People: American Jews and Their Lives Today by Charles E. Silberman
Chutzpah by Alan M. Dershowitz
Herzl by Amos Elon
Great Jews in Sports by Robert Slater
How to Get More Out of Being Jewish even if you are not sure you believe in God, you think going to synagogue is a waste of time, you think keeping kosher is stupid, you hated Hebrew school, or all of the above by Gil Mann
The Israelis: Founders and Sons by Amos Elon
Heritage: Civilization and the Jews by Abba Solomon Eban
A Treasury of Jewish Humor: A Classic Collection of Humorous Stories, Satires and Witticism from the Rich Jewish Literature of All Times by Nathan Ausubel
My Mother, Golda Meir: A Son's Evocation of Life with Golda Meir by Menahem Meir
Diary of the Sinai Campaign by Moshe Dayan
A Jew Today by Elie Wiesel
Bar-Kokhba: The Rediscovery of the Legendary Hero of the Second Jewish Revolt Against Rome by Yigael Yadin
In the land of Israel by Amos Oz
Great Jewish Women by Elinor Slater
World of Our Fathers: The Journey of the East European Jews to America and the Life They Found and Made by Irving Howe
Deborah, Golda, and Me: Being Female and Jewish in America by Letty Cottin Pogrebin
To Jerusalem and Back: A Personal Account by Saul Bellow
The Precious Legacy: Judaic Treasures from the Czechoslovak State Collection by David A. Altshuler
The Jews in America by David Cohen
A History of the Jews: From the Babylonian Exile to the Present by Solomon Grayzel
Great Jewish Thinkers of the Twentieth Century Edited with introductory essays by Simon Noveck
Life Is With People: The Culture of the Shtetl by Mark Zborowski
Encyclopedia of Jewish Humor: From Biblical Times to the Modern Age by Henry D. Spalding
Lioness: Golda Meir and the Nation of Israel by Francine Klagsbrun
The Jews of Silence: A Personal Report on Soviet Jewry by Eliezer Wiesel
Fewer