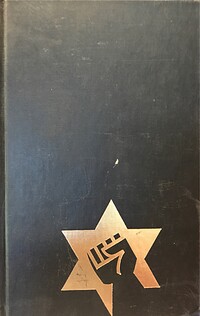 Never Again! A Program for Survival

Includes a detailed discussion of the philosophy of the JDL, and relates the history of Jewish oppression and the need to fight back. A must read for anyone concerned with justice and the fight against oppression. From the back cover of Never Again: Will Jews once again meekly submit or will they stand and fight? This is the question that Rabbi Meir Kahane asks the American Jewish community in a book controversial and explosive for what it dares to say as The Autobiography of Malcolm X and Soul On Ice were for their defiant and passionate messages. Meir Kahane, founder of the Jewish Defense League, shows how the older generation of American Jewry has abandoned and betrayed their fellow Jews, their personal heritage, and their children's identities in their rush for respectability and assimilation. He details how the dormant tiger of anti-Semitism is once again rousing itself and stalking the land. And he vividly describes what is being done and must be done to re-assert Jewish pride and power, so that Jews will answer with one voice when asked again go to the slaughter - Never Again… (more)

The Real Anti-Semitism in America by Nate Perlmutter
Shores of Refuge: A Hundred Years of Jewish Emigration by Ronald Sanders
While Six Million Died: A Chronicle of American Apathy by Arthur D. Morse
The Golden Tradition: Jewish Life and Thought in Eastern Europe by Lucy S. Dawidowicz
The Fugu Plan: The Untold Story of the Japanese and the Jews During World War II by Marvin Tokayer
9 more
In My Brother's Image: Twin Brothers Separated by Faith After the Holocaust by Eugene Pogany
The Precious Legacy: Judaic Treasures from the Czechoslovak State Collection by David A. Altshuler
Living with the Bible by Moshe Dayan
Hiding Places: A Father and His Sons Retrace Their Family's Escape from the Holocaust by Daniel Asa Rose
Hitler's War Against the Jews: A Young Reader's Version of The War Against the Jews, 1933-1945 by David A. Altshuler
A Certain People: American Jews and Their Lives Today by Charles E. Silberman
Promises Kept by Ernest W. Michel
The Yellow Star by S. B. Unsdorfer
The Jews of Silence: A Personal Report on Soviet Jewry by Eliezer Wiesel
Fewer