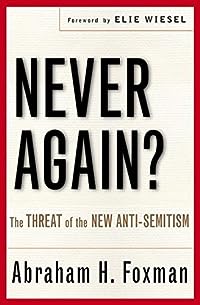 Never Again? The Threat of the New Anti-Semitism

The ongoing war on terror, instability in the Middle East, and a faltering world economy are capturing headlines everywhere. But through it all runs a disturbing current of which many people are only dimly aware. Anti-Semitism, which had been on the decline worldwide since the end of World War II, has over the past few years made a perilous return. How could the twenty-first century -- the new millennium launched with such optimism just a few short years ago -- have so quickly been marred by the emergence of age-old hatreds, now armed with the powers of global terrorism? As national director of the Anti-Defamation League, Abraham H. Foxman fights against the menace of intolerance every day. As a result of the disturbing events of the last few years, he is convinced that we currently face as great a threat to the safety and security of the Jewish people as we faced in the 1930s. Foxman writes: "Within living memory, we've seen what can happen when a nation or a continent experiences an unrestrained outbreak of anti-Semitism. The Jews of the world -- and all people of goodwill who share their desire for a just and free society -- learned a series of critical lessons from the tragic history of the twentieth century. Today, we understand how important it is to recognize the emergence of new forms of anti-Semitism so that we can warn the world and stave off the worst effects." Anti-Semitism remains a pernicious form of ethnic and religious intolerance, with consequences for all of humankind. In communities from the United States to the Middle East, Europe to South Africa and Latin America, Jews are being persecuted in old and new ways. Exploring the history of anti-Semitism and providing the first comprehensive examination of the new rampant anti-Jewish sentiment worldwide, Never Again? offers a crucial discussion of the steps that must be taken to prevent this century from witnessing a replay of the horrors of the last.… (more)

The Vanishing American Jew: In Search of Jewish Identity for the Next Century by Alan M. Dershowitz
Out of the Whirlwind: A Reader of Holocaust LIterature a reader of holocaust literature by Albert H. Friedlander
Deborah, Golda, and Me: Being Female and Jewish in America by Letty Cottin Pogrebin
The Abandonment of the Jews: America and the Holocaust, 1941-1945 by David S. Wyman
A Jew Today by Elie Wiesel
13 more
The Jews of Silence: A Personal Report on Soviet Jewry by Eliezer Wiesel
Jew vs. Jew: The Struggle for the Soul of American Jewry by Samuel G. Freedman
People Love Dead Jews: Reports from a Haunted Present by Dara Horn
I am Jewish: Personal Reflections Inspired by the Last Words of Daniel Pearl by Judea Pearl
How to Get More Out of Being Jewish even if you are not sure you believe in God, you think going to synagogue is a waste of time, you think keeping kosher is stupid, you hated Hebrew school, or all of the above by Gil Mann
From Time Immemorial: The Origins of the Arab-Jewish Conflict Over Palestine by Joan Peters
The Devil and the Jews: The Medieval Conception of the Jew and Its Relation to Modern Antisemitism by Joshua Trachtenberg
Heritage: Civilization and the Jews by Abba Solomon Eban
Standing with Israel by David Brog
A Convenient Hatred: The History of Antisemitism by Phyllis Goldstein
Chutzpah by Alan M. Dershowitz
Jewish Literacy: The Most Important Things to Know About the Jewish Religion, Its People, and Its History by Joseph Telushkin
The Myth of Hitler's Pope: How Pope Pius XII Rescued Jews from the Nazis by David G. Dalin
Fewer