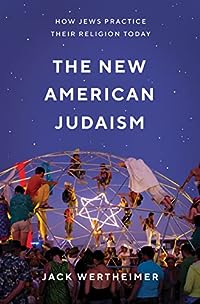 The New American Judaism: How Jews Practice Their Religion Today

A leading expert provides an engaging firsthand portrait of American Judaism today American Judaism has been buffeted by massive social upheavals in recent decades. Like other religions in the United States, it has witnessed a decline in the number of participants over the past forty years, and many who remain active struggle to reconcile their hallowed traditions with new perspectives--from feminism and the LGBTQ movement to "do-it-yourself religion" and personally defined spirituality. Taking a fresh look at American Judaism today, Jack Wertheimer, a leading authority on the subject, sets out to discover how Jews of various orientations practice their religion in this radically altered landscape. Which observances still resonate, and which ones have been given new meaning? What options are available for seekers or those dissatisfied with conventional forms of Judaism? And how are synagogues responding? Wertheimer provides new and often-surprising answers to these questions by drawing on a wide range of sources, including survey data, visits to countless synagogues, and revealing interviews with more than two hundred rabbis and other informed observers. He finds that the majority of American Jews still identify with their faith but often practice it on their own terms. Meanwhile, gender barriers are loosening within religiously traditional communities, while some of the most progressive sectors are reappropriating long-discarded practices. Other recent developments include "start-ups" led by charismatic young rabbis, the explosive growth of Orthodox "outreach," and unconventional worship experiences often geared toward millennials. Wertheimer captures the remarkable, if at times jarring, tableaux on display when American Jews practice their religion, while also revealing possibilities for significant renewal in American Judaism. What emerges is a quintessentially American story of rash disruption and creative reinvention, religious illiteracy and dynamic experimentation.… (more)

If All the Seas Were Ink: A Memoir by Ilana Kurshan
Jew vs. Jew: The Struggle for the Soul of American Jewry by Samuel G. Freedman
Lioness: Golda Meir and the Nation of Israel by Francine Klagsbrun
Jewish and Female: Choices and Changes in Our Lives Today by Susan Weidman Schneider
Judaism as a Civilization: Toward a Reconstruction of American Jewish Life by Mordecai Menahem Kaplan
13 more
The Last Watchman of Old Cairo a novel by Michael David Lukas
My Jewish Year: 18 Holidays, One Wondering Jew by Abigail Pogrebin
Sacred Fragments: Recovering Theology for the Modern Jew by Neil Gillman
American Judaism by Nathan Glazer
A Certain People: American Jews and Their Lives Today by Charles E. Silberman
The Book of Separation: A Memoir by Tova Mirvis
Like Dreamers: The Story of the Israeli Paratroopers Who Reunited Jerusalem and Divided a Nation by Yossi Klein Halevi
Profiles in American Judaism: The Reform, Conservative, Orthodox, and Reconstructionist Traditions in Historical Perspective by Marc Lee Raphael
Stars of David: Prominent Jews Talk About Being Jewish by Abigail Pogrebin
All Who Go Do Not Return: A Memoir by Shulem Deen
How to Get More Out of Being Jewish even if you are not sure you believe in God, you think going to synagogue is a waste of time, you think keeping kosher is stupid, you hated Hebrew school, or all of the above by Gil Mann
New American Haggadah by Jonathan Safran Foer
The World of the Yeshiva: An Intimate Portrait of Orthodox Jewry by William B. Helmreich
Fewer