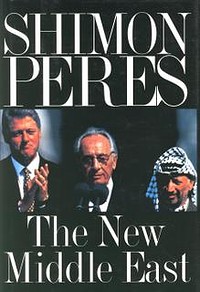 "The late-summer headlines of a landmark peace accord between the government of Israel and the Palestine Liberation Organization stunned and delighted citizens of conscience from every walk of life and from all over the world. Here, at last, were the first glimmerings of harmony for a region whose bloody, intractable conflicts between Arab and Jew had outlived hot and cold wars alike to become an inescapable, insoluble fact of life in our modern age." "Many men and women of peace and vision worked together to bring about this epoch-making accord, but none played a more prominent and crucial role than Israeli Minister of Foreign Affairs, and former Prime Minister, Shimon Peres. Using both behind-the-scenes statecraft and the very public platform of the international media, Peres has called for nothing less than a total transvaluation of our thinking about the future of the Middle East. Peace, he has argued eloquently, is the only alternative for Jews and Arabs poised on the verge of a new century, and a new millennium. Peace will come only as the result of compromise. Peace is the only way to prevent posterity from making the same terrible mistakes of preceding generations." "In The New Middle East Peres offers a compelling vision of the future for his region. He sees a reconstructed Middle East, free of the conflicts that plagued it in the past, set to take its place in a new era - an era that will not tolerate backwardness or ignorance. He sees a social revival, and an economic revival as well - one fueled by the billions upon billions of dollars wasted for decades on defense. But crucially, he is not fixated only on what might be. He offers a no less cogent analysis of how peace can be achieved. He seeks nothing short of a historic new chapter between two peoples: to end a hundred years of hostility, and to begin a hundred years of peace and understanding." "The New Middle East is a blueprint for the dawning of a new age. A visionary manifesto of current events no one can afford to ignore, it also may become one of the enduring political documents of our time."--BOOK JACKET.Title Summary field provided by Blackwell North America, Inc. All Rights Reserved… (more)

Myths and Facts: A Guide to the Arab-Israeli Conflict by Mitchell G. Bard
The Battle for Peace by Ezer Weizman
Profiles in American Judaism: The Reform, Conservative, Orthodox, and Reconstructionist Traditions in Historical Perspective by Marc Lee Raphael
A Certain People: American Jews and Their Lives Today by Charles E. Silberman
The Jews in America by David Cohen
10 more
Lightning Out of Israel: The Six-Day War in the Middle East by Associated Press.,
From Beirut to Jerusalem by Thomas L. Friedman
My People: The Story of the Jews by Abba Solomon Eban
Abba Eban: An Autobiography by Abba Solomon Eban
Growing up Jewish: An Anthology by Jay David
Living with the Bible by Moshe Dayan
The Israelis: Founders and Sons by Amos Elon
Arab and Jew: Wounded Spirits in a Promised Land by David K. Shipler
Bar-Kokhba: The Rediscovery of the Legendary Hero of the Second Jewish Revolt Against Rome by Yigael Yadin
Negotiating Arab-Israeli Peace: American Leadership in the Middle East by Daniel Kurtzer
Fewer