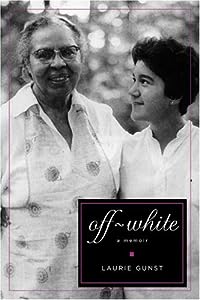 Laurie Gunst is the youngest child of a well-to-do southern family of German-Jewish descent. Her primary source of care and love is Rhoda, a woman who had been her grandmother's maid. Summoned from New York City to Richmond, Virginia, childless Rhoda had taken charge of the new baby and raised her. The intimate relationship between caregiver and child is strong. So is Laurie's shame at aspects of her family's racially intolerant past: An ancestor fought for the South in the Civil War and another cooperated with the Ku Klux Klan in fomenting a race riot. As a vulnerable child, she witnesses firsthand the unfairness of segregation that consigns the woman who cares for her to a lesser status. Laurie's outrage at racial discrimination sets her apart from other white southerners, even her father. Love for Rhoda marks Laurie indelibly. Their relationship enables her to see the person and not just the color of her skin. Ultimately, she acknowledges Rhoda as a spiritual mother who shaped her life as much as her biological mother. Laurie Gunst was born and raised in Richmond, Virginia, with summers in Wilmington, North Carolina. She received her undergraduate degree from the University of New Hampshire and a PhD from Harvard University. She is the author of Born Fi' Dead: A Journey Through the Jamaican Posse Underworld, published by Holt in 1996. She now teaches a course on race relations at The New School in New York City, where she lives with her husband.… (more)

LibraryThing member Manthepark
A coming-of-age (and then some) memoir of growing up in Richmond, Virginia. It is an interesting multi-cultural story in a place I don’t think of as particularly open-minded or worldly (said with apologies to the people of Richmond). From a Jewish family, Laurie feels like an outsider to start
Show More
with. But through the woman who helps raise her, she connects with the African-American community . Laurie weaves a story of how that connection carries forward through much of her life.
Show Less