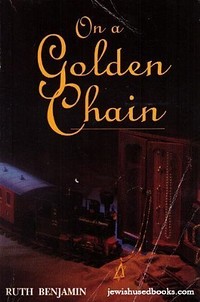 On a Golden Chain

Jews in Other Countries

Life for the Wilson family living in a small English town was picture perfect. But when her young son receives a toy train as a gift, Dorothy reacts with strange agitation. Soon she is having recurrences of an inexplicable old nightmare involving a terrible train crash. Why does it all seem so real? And why is it always the same? Then the family is suddenly plunged into confusion by the sudden death of Dorothy's mother who, with her last gasping breath , reveals that Dorothy is not really her child. Dorothy is stunned. Who is she? Who are her real parents? Are they still alive? How can she ever expect to find them? Unfortunately the only clue to her identity is a small Jewish star on a golden chain . . .and those awful nightmares. This book was first published by CIS in 1991, was translated into French and Spanish and reprinted in hard cover in 2001. As it is becoming difficult to obtain I have self published it.… (more)