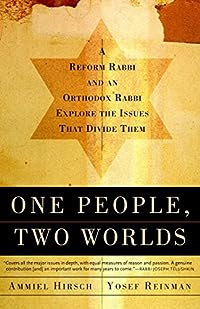 One People, Two Worlds: An Orthodox Rabbi and a Reform Rabbi Explore the Issues that Divide Them

After being introduced by a mutual friend in the winter of 2000, Reform Rabbi Ammiel Hirsch and Orthodox Rabbi Yosef Reinman embarked on an unprecedented eighteen-month e-mail correspondence on the fundamental principles of Jewish faith and practice. What resulted is this book: an honest, intelligent, no-holds-barred discussion of virtually every "hot button" issue on which Reform and Orthodox Jews differ, among them the existence of a Supreme Being, the origins and authenticity of the Bible and the Oral Law, the role of women, assimilation, the value of secular culture, and Israel. Sometimes they agree; more often than not they disagree--and quite sharply, too. But the important thing is that, as they keep talking to each other, they discover that they actually like each other, and, above all, they respect each other. Their journey from mutual suspicion to mutual regard is an extraordinary one; from it, both Jews and non-Jews of all backgrounds can learn a great deal about the practice of Judaism today and about the continuity of the Jewish people into the future.… (more)

LibraryThing member drinkingtea
You know that feeling you get when watching a Western and the people are shooting at each other but not quite hitting one another? This is the feeling you get when reading the book. Is it bad aim? Is it that the other person has better cover? Divine intervention? Who knows? Who cares? Both parties
Show More
seem to be debating not quite the same thing and/or using proofs that aren't quite valid to the other person.
Show Less

Jew vs. Jew: The Struggle for the Soul of American Jewry by Samuel G. Freedman
Who Is a Jew? Conversations, Not Conclusions by Meryl Hyman
The Vanishing American Jew: In Search of Jewish Identity for the Next Century by Alan M. Dershowitz
Finding God: Ten Jewish Responses ten Jewish responses by Rifat Sonsino
How to Run a Traditional Jewish Household by Blu Greenberg
15 more
The New Rabbi: A Congregation Searches For Its Leader by Stephen Fried
Deborah, Golda, and Me: Being Female and Jewish in America by Letty Cottin Pogrebin
Profiles in American Judaism: The Reform, Conservative, Orthodox, and Reconstructionist Traditions in Historical Perspective by Marc Lee Raphael
Jewish Renewal: A Path to Healing and Transformation by Michael Lerner
A Certain People: American Jews and Their Lives Today by Charles E. Silberman
Gates of Mitzvah: A Guide to the Jewish Life Cycle by Simeon J. Maslin
The Nine Questions People Ask about Judaism by Dennis Prager
Sacred Fragments: Recovering Theology for the Modern Jew by Neil Gillman
The Second Jewish Book of Why by Alfred J. Kolatch
The Third Jewish Catalog: Creating Community by Sharon Strassfeld
The Committed Marriage: A Guide to Finding a Soul Mate and Building a Relationship Through Timeless Biblical Wisdom by Esther Jungreis
I am Jewish: Personal Reflections Inspired by the Last Words of Daniel Pearl by Judea Pearl
On Women and Judaism: A View from Tradition by Blu Greenberg
The World of the Yeshiva: An Intimate Portrait of Orthodox Jewry by William B. Helmreich
God Was Not in the Fire: The Search for a Spiritual Judaism by Daniel Gordis
Fewer