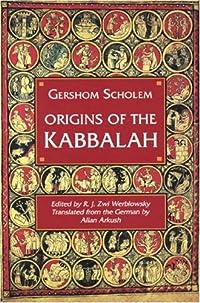 Origins of the Kabbalah

One of the most important scholars of our century, Gershom Scholem (1897-1982) opened up a once esoteric world of Jewish mysticism, the Kabbalah, to concerned students of religion. The Kabbalah is a rich tradition of repeated attempts to achieve and portray direct experiences of God: its twelfth-and thirteenth-century beginnings in southern France and Spain are probed in Origins of the Kabbalah, a work crucial in Scholem's oeuvre. The book is a contribution not only to the history of Jewish medieval mysticism but also to the study of medieval mysticism in general and will be of interest to historians and psychologists, as well as to students of the history of religion.

The Bahir Illumination: One of the Oldest, Most Important, and Most Carefully Preserved of All Ancient Kabbalah Texts by Aryeh Kaplan
Major Trends in Jewish Mysticism by Gershom Scholem
Mystic Tales from the Zohar by Aryeh Wineman
Kabbalah by Gershom Gerhard Scholem
Zohar: The Book of Enlightenment by Daniel Chanan Matt
3 more
The Thirteen Petalled Rose by Adin Steinsaltz
Hebrew Ethical Wills by Israel Abrahams
The Essential Kabbalah: The Heart of Jewish Mysticism by Daniel Chanan Matt
Fewer