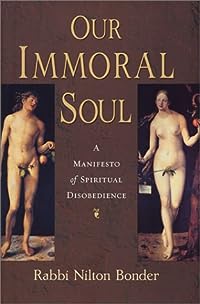 Our Immoral Soul: A Manifesto of Spiritual Disobedience

Rabbi Bonder turns a few conventional religious ideas on their heads as he examines the Bible and other Jewish teachings to identify the forces at play in individual, social, and spiritual transformation. Religious conformists believe that obeying the established moral order will lead to the salvation of our souls. On the contrary, says Bonder, the human spirit is nourished by what society labels immoral. Even the Bible legitimizes the notion that we have a God-given urge to rebel against the status quo in order to evolve, grow, and ascend. It is this "immoral" soul of ours that impels us to do battle with God-and out of this clash, Bonder predicts, a new humanity will emerge. In the course of discussion, the author examines a variety of intriguing issues touching on religion, science, and culture, including the teachings of evolutionary psychology; the relation of body and soul; infidelity in marriage; anti-Semitism and the Jew as traitor; transgression, sacrifice, and redemption in Judaism and Christianity; and the Messiah as archetypal transgressor.… (more)

Gateway to Judaism: Encyclopedia Home Reference, Volume II by Albert M. Shulman
The Rosh Hashanah Anthology by Philip Goodman
Sacred Fragments: Recovering Theology for the Modern Jew by Neil Gillman
Practical Kabbalah: A Guide to Jewish Wisdom for Everyday Life by Laibl Wolf
Hasidic anthology tales and teachings of the Hasidim by Louis I. Newman
18 more
The Religion of Israel: From Its Beginnings to the Babylonian Exile by Yehezkel Kaufmann
The Strife of the Spirit by Adin Steinsaltz
The Essential Kabbalah: The Heart of Jewish Mysticism by Daniel Chanan Matt
The Hanukkah Anthology by Philip Goodman
Conservative Judaism: An American Religious Movement by Marshall Sklare
The Second Jewish Book of Why by Alfred J. Kolatch
The Language of Judaism by Simon Glustrom
The Service of the Heart: A Guide to the Jewish Prayer Book by Evelyn Garfiel
The Jew in the Lotus: A Poet's Rediscovery of Jewish Identity in Buddhist India by Rodger Kamenetz
The Nine Questions People Ask about Judaism by Dennis Prager
Dictionary of Jewish Lore and Legend by Alan Unterman
Stalking Elijah: Adventures with Today's Jewish Mystical Masters by Rodger Kamenetz
Sabbath: The Day of Delight by Abraham Ezra Millgram
On Women and Judaism: A View from Tradition by Blu Greenberg
This Is My God by Herman Wouk
The Sukkot/Simhat Torah Anthology by Philip Goodman
The Jewish Catalog: A Do-It-Yourself Kit by Richard Siegel
A Jewish Bestiary: A Book of Fabulous Creatures Drawn from Hebraic Legend and Lore by Mark H. Podwal
Fewer