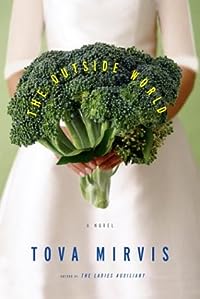 From the best-selling author ofThe Ladies Auxiliary,a hilarious new novel about two Orthodox Jewish families brought together by the marriage of their children. Tzippy Goldman’s mother has been planning her wedding since before she was born. Her four younger sisters want her to marry the crown prince of Boro Park. But Tzippy, approaching spinsterhood at the age of twenty-two, has other ideas. Tzippy has been on one too many blind dates in the lobby of the Brooklyn Marriott. She is hungry for experience and longs to escape the suffocating expectations of religious stricture and romantic obligation. Bryan Miller’s family lives in a liberal New Jersey community. Like Orthodox Jews anywhere in the world, they spend Saturdays in synagogue. And like suburbanites anywhere in the world, they wake up on Sundays and take their kids to Little League games and stop for pizza on the way home. But to Bryan, this middle road looks more and more like hypocrisy. He longs for conviction, for the relief of absolutes. To his parents’ bewilderment and horror, he trades in his beloved Yankees cap for the black fedora of the ultra-Orthodox. In the courtship of Bryan and Tzippy, and in the progress of their highly freighted love affair and marriage, Tova Mirvis illuminates an insular world, where ancient and modern collide. With warmth, originality, and remarkable insight, she considers isolation and assimilation; the fervor of the zealot, the doubt of the truly faithful; the hunger for freedom, the hunger for God; and the retreat into traditionalism that has become a worldwide phenomenon among young people of all religions.The Outside Worldis a marvelous evocation of family and community, and of the struggle to be religious in a modern world.… (more)

LibraryThing member russelllindsey
An incredible look at the Orthodox Jewish community from the inside. It is a decent romance novel as well.
3 more
LibraryThing member CatieN
Tzippy Goldman is an unmarried young woman, Orthodox Jew, whose mother is frantically trying to marry her off. Bryan Miller is a young man from a liberal Orthodox Jewish family who spends time in Israel and comes back an ultra-Orthodox Jew. Tzippy and Bryan (Baroch) meet, fall in love, and
Show More
eventually marry. Their courtship and marriage is a comedy and tragedy involving both of their families. Good book and a learning experience for a non-Jew like me.
Show Less
LibraryThing member stacyinthecity
This is a book that is marketed to be about dating and relationships within Jewish Orthodoxy, but really it is a book about faith - what drives people's faith and belief in God, and why is there such a vast difference between people? It is a topic worthy of much discussion and deep introspection,
Show More
so it was interesting to see it tackled within the context of Jewish Orthodoxy, a world most of us know little about.

I live in Brooklyn, probably just a few blocks from where this book takes place, so it was very easy for me to imagine their world based on the author's descriptions and what I've seen myself. I also happen to be friends with an Orthodox Jewish woman, so I was familiar with many words and concepts that may have otherwise been more difficult to understand while trying to enjoy a novel. It was interesting to read these character's voice from the inside.

One thing my Orthodox friend did warn me about was that this book may be a little unfairly biased against Orthodox Judaism. After reading the book, I can understand why she feels that way. There is an awful lot about the difficulty of keeping up appearances, the endless rules, the lure of the outside world, but less about why this way of life is so fulfilling. It would have been nice to read more about that.

I also found the various points of view and shifting of the omniscient 3rd person point of view jarring. Sometimes it was hard to tell whose thoughts I was reading, and just when I got used to one point of view, it would change. The same thing happened with time passing. It was very confusing to realize I'd shifted forward months without a clear transition.

Overall, I felt it was an excellent concept and still give me good food for thought along with an entertaining story, but I wish it had been better executed.
Show Less
LibraryThing member bobbybslax
The characters are fleshed out, but too much time is spent within their minds and not enough time without. A problem with people is that they tend to think repetitively, and these characters are no different. They tend to be boring, and their lives rarely turn in compelling ways. The writing isn't
Show More
bad per se; this would make for a pretty good 50-100 page (and maybe even less) novella/short story. I don't think the story, as its told, merits its length.
Show Less
Fewer

The Ladies Auxiliary by Tova Mirvis
The Ghost of Hannah Mendes by Naomi Ragen
The Covenant by Naomi Ragen
Rashi's Daughters - Book I: Joheved by Maggie Anton
Three Daughters by Letty Cottin Pogrebin
25 more
As a Driven Leaf by Milton Steinberg
Stars of David: Prominent Jews Talk About Being Jewish by Abigail Pogrebin
On Women and Judaism: A View from Tradition by Blu Greenberg
Deborah, Golda, and Me: Being Female and Jewish in America by Letty Cottin Pogrebin
I am Jewish: Personal Reflections Inspired by the Last Words of Daniel Pearl by Judea Pearl
The Wise Men of Helm and Their Merry Tales by Solomon Simon
To Raise a Jewish Child: A Guide for Parents by Hayim Donin
The Chosen by Chaim Potok
The Jews in Their Land by David Ben-Gurion
How to Get More Out of Being Jewish even if you are not sure you believe in God, you think going to synagogue is a waste of time, you think keeping kosher is stupid, you hated Hebrew school, or all of the above by Gil Mann
A Feast of History: The Drama of Passover through the Ages by Chaim Raphael
My Name is Asher Lev by Chaim Potok
A Jew Today by Elie Wiesel
The New Rabbi: A Congregation Searches For Its Leader by Stephen Fried
The Man in the White Sharkskin Suit: A Jewish Family's Exodus from Old Cairo to the New World by Lucette Matalon Lagnado
The Vanishing American Jew: In Search of Jewish Identity for the Next Century by Alan M. Dershowitz
The Tenth Song: A Novel by Naomi Ragen
The New Jewish Baby Book: Names, Ceremonies & Customs -- A Guide for Today's Families by Anita Diamant
Great Jews in Sports by Robert Slater
Rashi's Daughters - Book II: Miriam by Maggie Anton
Your Jewish Lexicon: Some Words and Phrases in Jewish Life and Thought in Hebrew and English by Edith Samuel
The Modern Jewish Girl's Guide to Guilt by Ruth Andrew Ellenson
The Third Jewish Catalog: Creating Community by Sharon Strassfeld
Davita's Harp by Chaim Potok
I Am Forbidden by Anouk Markovits
Fewer