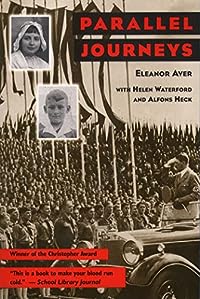 She was a young German Jew. He was an ardent member of the Hitler Youth. This is the story of their parallel journey through World War II. Helen Waterford and Alfons Heck were born just a few miles from each other in the German Rhineland. But their lives took radically different courses: Helen's to the Auschwitz concentration camp; Alfons to a high rank in the Hitler Youth. While Helen was hiding in Amsterdam, Alfons was a fanatic believer in Hitler's "master race." While she was crammed in a cattle car bound for the death camp Auschwitz, he was a teenage commander of frontline troops, ready to fight and die for the glory of Hitler and the Fatherland. This book tells both of their stories, side-by-side, in an overwhelming account of the nightmare that was World War II. The riveting stories of these two remarkable people must stand as a powerful lesson to us all.… (more)

book
one of the best book on the halocaust/hitler youth

Compelling read. The aftermath is almost more interesting than the war time years.
Show Less
LibraryThing member lndgrr
Excellent dual biography, juxtaposing a concerntration survivor with a Hitler Youth.
LibraryThing member SpriteGoodNight
Parallel Journeys by Eleanor Ayers, Alfons Heck, and Helen Waterford is a devastating book that will make you wonder how people could have possibly been so evil, stupid, and strong. It is a narration through the two books Commitment to the Dead by Helen Waterford and A Child of Hitler by Alfons
Show More
Heck. Parallel Journeys tells the stories of both Alfons and Helen’s lives. Helen was a married Jewish woman by the time World War II began. At that same time, Alfons was a proud young member of the Hitler Youth.
Throughout and long after the war, they both suffered because of Adolf Hitler. Helen suffered from starvation and the fear of dying in a concentration camp. Alfons suffered from having his childhood taken away from him at the tender age of ten. He grew up believing Hitler was a god and he would do anything to help that god. Heck’s friends and family where killed sacrificing themselves for the Fatherland. Alfons Heck suffered the most after the war. He had to carry the burden of his “god” who had tricked him into believing he was a great, wonderful, innocent man. His situation was very similar to many other Hitler Youth members.
When I read about Alfons Heck carrying the burden of Hitler and receiving hatred from lots of people because of his membership in the Hitler Youth, I had to stop reading to try to figure out this question. Are Alfons and other Hitler Youth members guilty of the crimes they committed during World War II, or are they innocent because of their age? This is a very hard question, but I would consider them to be guilty. Even though they were young, they knew they were killing people. They certainly shouldn’t be as harshly sentenced or blamed as those who tried to convince these Hitler Youth members to commit these crimes.
To try to lessen the burden he had to carry, Alfons fled Germany and moved to Canada. Eventually he would move out of Canada and into the United States. After Heck moved to America, he started writing articles for newspapers and magazines about his membership in the Hitler Youth. Helen Waterford read one of these articles and then did the unthinkable. She called Alfons to ask him if he would want to start lecturing with her about World War II. Heck agreed, and soon they were speaking to hundreds of high school and college students.
After they had each told their story, they would allow the audience to ask them questions. Many of these questions where very hard for them to answer. One student even asked Alfons if he would have shot Helen if he was told to. Heck told the truth; yes he would have killed her, because he was taught to follow any order no matter how absurd or evil. Helen and Alfons had a very fragile and strange relationship.
Because of her friendship with a German, Helen received more nasty remarks and questions then Alfons. Many of those questions where similar to, “When did you stop hating Alfons?” to this Helen replied that she had never hated him. That shocked many people. They then wanted to know what she expected to gain from not hating him. She explained that, “I had learned only too well that hate is a boomerang that only destroys the sender. I wanted to build peace, not feed the flame of a never-ending destruction."
Parallel Journeys does a great job of explaining the tragedy of World War II. It is a wonderful, informational comparison of two memoirs. Surprisingly, it is one of the best books I have ever read. I recommend this book to anyone over the age of twelve, because for younger kids this might be a little too scary. For everyone else, this is an excellent read if you want to learn about World War II.
Show Less
LibraryThing member SarahGraceGrzy
This is a hard book to rate, so I think I am going to skip the rating and just review it.

This was a very accurate, real life, and therefore sometimes slightly gruesome account of a young boy in the Hitler Youth, and a Jewish girlwoman in her fight for her life, and the lives of her husband and
Show More
daughter. It was very fascinating and made me want to keep reading. But at the same time, it was very hard to get through because of the sheer bleakness portrayed. WWII was not a happy time for many people in Europe, to put it mildly. The desperation and fear of these times for people like the Jews, and yet the exhilaration and thrilling excitement for followers of Hitler, particularly the Hitler Youth. It's just mind-blowing, really. Surprisingly, throughout most of the book, I felt a compassion and sympathy for Alfons. It is so sad that someone can be so brainwashed and blinded by the lies of the Enemy that they would blindly follow such a person as Hitler, and give their whole-hearted dedication to said person. And, of course, Helen's story also broke my heart.

I loved how the author included frequent snippets from both of the character's autobiographies. It lent a more personal aspect to the otherwise simple relaying of facts.

Not recommended for anyone under the age of 15 or for sensitive persons. I was in tears numerous times just at the numbers. It was a very good and well written account, but definitely not something I would read again!
Show Less
LibraryThing member kristi17
"Parallel Journeys" by Eleanor Ayer, is the story of two young Germans during WWII. The girl (Helen Waterford) was Jewish and fled to Amsterdam to escape the Nazi's only to get captured there and end up at the Auschwitz concentration camp. The boy (Alfons Heck) was an avid member of the Hitler
Show More
Youth, and by the time he was 16 (16!) had achieved a rank equivalent to a major general just before the war ended - he commanded 6,000 Hitler Youth troops.

Although the two never met during the war (they were about 19 years apart in age), the story unfolds by chronologically switching back in forth between their perspectives, so the reader gets to see what each was doing at the same points in time. It is geared toward teenagers because the author describes in detail the adolescence of both individuals, and how the choices they made during that time effected the rest of their lives. There is a lot of discussion about the Hitler Youth as well, and how many young kids died for the Nazis. There are a lot of quotes taken directly from their respective biographies included in the narrative.

I enjoyed the book not only because of these individuals' huge part in history (she actually knew the Frank family; he once met Hitler in person) but because it goes on to tell how the lives of all the people panned out. Unbelievably, they actually met in 1980 and did a series of lectures together. Very interesting stuff!
Show Less
LibraryThing member AngelaB86
A biography of a man and woman, both raised in Germany during WWII: the man raised in Hitler Youth, the woman a Jew.
Fewer

Promises Kept by Ernest W. Michel
Survivors Club: The True Story of a Very Young Prisoner of Auschwitz by Michael Bornstein
The Cage by Ruth Minsky Sender
By Bread Alone: The Story of A-4685 by Mel Mermelstein
We Will Not Be Silent: The White Rose Student Resistance Movement that Defied Adolf Hitler by Russell Freedman
2 more
The Triumphant Spirit: Portraits & Stories of Holocaust Survivors... Their Messages of Hope & Compassion by Nick Del Calzo
When Hitler Stole Pink Rabbit by Judith Kerr
Fewer