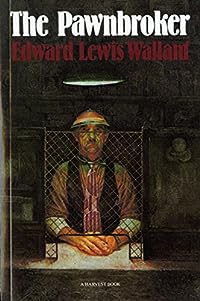 For most of us, remembering the Holocaust requires effort; we listen to stories, watch films, read histories. But the people who came to be called "survivors" could not avoid their memories. Sol Nazerman, protagonist of Edward Lewis Wallant'sThe Pawnbroker, is one such sufferer. At 45, Nazerman, who survived Bergen-Belsen although his wife and children did not, runs a Harlem pawnshop. But the operation is only a front for a gangster who pays Nazerman a comfortable salary for his services. Nazerman's dreams are haunted by visions of his past tortures. (Dramatizations of these scenes in Sidney Lumet's 1964 film version are famous for being the first time the extermination camps were depicted in a Hollywood movie.) Remarkable for its attempts to dramatize the aftereffects of the Holocaust,The Pawnbroker is likewise valuable as an exploration of the fraught relationships between Jews and other American minority groups. That this novel, a National Book Award finalist, remains so powerful today makes it all the more tragic that its talented author died, at age 36, the year after its publication. The book sold more than 500,000 copies soon after it was published.… (more)

Wallant (1926-1962), an American writer, died at 36. He published a number of short stories and wrote four novels, two of which were published posthumously. The Pawnbroker was made into an award-winning movie with Rod Steiger. In 1962, the University of Hartford
Show More
established the Edward Lewis Wallant award which is presented annually to a writer whose fiction is considered to have significance for American Jews.

The novel is told through the life of Sol Nazerman, once a professor in a university in Poland, a Holocaust survivor and now the owner of a rundown pawnshop in Harlem in the late 50s, fifteen years after the deaths of his wife and two young children in one of the Nazi death camps. The pawnshop is also a front for money-laundering the profits of a local crime boss. Physically, Sol is a 'survivor', but emotionally he is blasted and burned, living within a carapace of pain, unable, uninterested and unwilling to form any emotional attachment even when it is offered to him. He lives with, and financially supports, his sister, brother-in-law and their two teenage children in an uneasy household of non-communication. Occasionally he visits and has sex with a woman friend whose father is also a camp survivor now reliving the horrors as he spirals down to death.

One person with whom Sol does have a connection, of sorts, is a young Black man, Jesus Ortiz, working in the pawnshop and keen to learn the business: "Ortiz dazed him with the peculiar beauty of his smile again. There was something dangerous and wild on his smooth face, a look of guile and unpredictable curiosity; and yet, oddly, there was an unnerving quality of volatile innocence there, too....Sol had the vague feeling that there were certain horrors this boy would not commit. In Sol Nazerman's eyes, this was a great deal; there were very few people to whom he attributed even that limitation of evil." Ortiz wants to better his life, but he falls in with three men in a plan to rob Sol who weekly receives a substantial amount of cash from the crime boss. The dramatic tension around Ortiz and this plan drives the plot of the novel and does have the reader on tenterhooks about what could happen.

Incidents of the Holocaust are seen in flashbacks in Sol's dreams and memories and there are only a few in the novel. However, this is very effective because the incidents isolate and thus highlight the moment, deliver an emotionally shattering experience of a world where all norms of civilized, or even just decent, behaviour do not exist, and make one wonder how any person could live, never mind function at all, after such trauma.

So, why read what sounds like such a depressing novel? Because it deals with a human horror that should be known and thought about, because it is wonderfully written, and because in the Harlem slums it unflinchingly portrays a swath and complexity of humanity too easy to ignore in our frenetic, materialist world.

Wallant had a gift for description. "...gaudy little Tangee in a wide-shouldered, checked suit, and Buck White, with his majestic tribesman face of almost pure black, who appeared elemental in his dignity until you noticed the foolish, childish dreaminess of his eyes." "His fresh, youthful face was good-natured but not very mobile or expressive, as though too much animation might belie his alleged delicacy." "George Smith had the face of an old Venetian doge, the features drawn with a silvery-fine pencil, the excesses reproduced in the shallowest, most subtle of creases. Only his eyes mirrored the wrestling starvation." "She glared guiltily at him, her yellow face scoured and worn by petty miseries to a texture that obscured the massive old deformities." Wallant is equally good at describing things as well as people: "...an armchair which leaned swollenly to one side under its faded cretonne covering, like an old sick elephant under shabby regal garments."

And the pawnshop! What a parade of humanity passes through it daily: "On and on they came, shy, sullen, guilty, paying in fear for tiny crimes they had done and were doomed to do, striking out with furtiveness and harshness, sickened with their hereditary curse, weary and ashamed of their small dreams and abandoning the cheap devices they had dreamed with...each filling the Pawnbroker's spirit with rage and disgust as he smelled and saw their ugliness." "...by degrees the harshness dissolved, and the fantastic conglomeration of the shop claimed their unconscious moods. Again they were riven by the complexity, the intricacy of the tools or people's survival. And each, in his own unthinking way, responded to a tiny, sad abrasion in his spirit. Each of them pitied, without knowing he pitied, the pathetic paraphernalia with which humans made walls."

Wallant does not directly draw the pawnshop as metaphor, but I was struck by the overlapping vision of thousands upon thousands of people driven off the fetid cattle cars, clutching their few, pathetic worldly goods that would, in a moment, be taken from them until, naked, they would be herded into the 'showers' and there would be no walls left for them. Each and every person is "in slightly different costume, each enlivened by his own unique choreography." The choreographies comprise individual pasts, experiences, hopes, fears, dreams. Every single person is unique and that is what we miss in parsing large historical movements or moments in a shop.

Sol feels his loss: "God forbid there should be ghosts! He would not have been able to bear that. If there were ghosts, he would have been destroyed, or had been destroyed long ago and was now a ghost himself." But, like Lear, he cries out, "Ah, leave me my brain at least, do not let me go mad."

Something happens at the end of the book, but the reader should enjoy his/her own frissons of expectation so I will say no more about it as positive or negative. But I will say that this is a fine novel that deserves to be read and contemplated.
Show Less