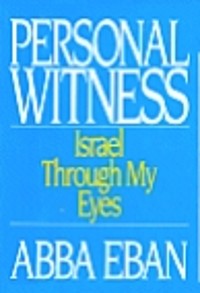 Personal Witness: Israel Through My Eyes

"Personal Witness, as its title indicates, is the passionate account of Israel's first five decades, written by one of its founding fathers, and it is both an objective and a subjective assessment of those history-making years. It is also the subject of a five-part PBS series to be broadcast in the United States and many other countries." "Personal Witness is a political and social history of the highest level, presented without fear or favor - a glaringly candid testament written at a time when Eban is not restrained by the formalities of office or diplomatic niceties. Here you may meet Abba Eban, the man behind the statesman, writer, orator and historian - the man who said, "Men and nations sometimes behave wisely, once they have exhausted all the other alternatives."" "In the style that has won him renown, Eban traces Israel through all the fluctuations of its fortunes to which he was a witness and a participant: from its embattled beginnings and first struggle for international recognition, when "Israel held the joy of birth and the fear of death in a single taste"; through the successive wars and diplomatic crises, in which he was frequently a central spokesman and policymaker; to the dreams and often bitter conflicts of today." "Along the way come splendid sidelights - reactions not only to events but to people, the men and women who strove to create Israel, and the international leaders who helped or hindered them. In intimate, often surprising vignettes, Eban depicts the world leaders he has encountered over more than four decades, offering frank comments on every American president from Truman ("If there was such a thing as an 'imperial presidency,' no one seemed to have broken the news to Harry S. Truman") to Bush; on leaders from Churchill, de Gaulle and Kohl to Sadat and King Hussein; and on the Jewish and Israeli gallery, from Ben-Gurion and Meir to Begin, Rabin and Shamir." "In 1984, Heritage: Civilization and the Jews, Eban's enormously successful account of the history of the Jewish people up to 1948, appeared as a nine-part television series on public television and a colorful and evocative companion book of the same name. Now, in a shifting of gears, comes Personal Witness, and Eban on Israel is an extraordinary pairing of writer and subject - pointed, knowledgeable, alive with drama and humor, and above all, intensely personal. Throughout, Eban's eye is clear, his perspective humane, his voice rich and dramatic, and his vision sweeping. Indispensable as history, irresistible as memoir, it is a book for anyone who cares about the destiny of Israel and the Middle East."--BOOK JACKET.Title Summary field provided by Blackwell North America, Inc. All Rights Reserved… (more)

Abba Eban: An Autobiography by Abba Solomon Eban
The Jews in America: Four Centuries of an Uneasy Encounter by Arthur Hertzberg
Chutzpah by Alan M. Dershowitz
A History of Israel: From the Rise of Zionism to Our Time by Howard Morley Sachar
Great Jewish Women by Elinor Slater
21 more
The Jews in America by David Cohen
Leo Rosten's Treasury of Jewish Quotations by Leo Calvin Rosten
The Jews: A Treasury of Art and Literature by Sharon R. Keller
In the land of Israel by Amos Oz
The Siege: The Saga of Israel and Zionism by Conor Cruise O'Brien
Bar-Kokhba: The Rediscovery of the Legendary Hero of the Second Jewish Revolt Against Rome by Yigael Yadin
The Jews in Their Land by David Ben-Gurion
My Country: The Story of Modern Israel by Abba Solomon Eban
Moshe Dayan: Story of My Life by Moshe Dayan
The Abandonment of the Jews: America and the Holocaust, 1941-1945 by David S. Wyman
Deborah, Golda, and Me: Being Female and Jewish in America by Letty Cottin Pogrebin
The Vanishing American Jew: In Search of Jewish Identity for the Next Century by Alan M. Dershowitz
A Special Legacy: An Oral History of Soviet Jewish Emigres in the United States by Sylvia Rothchild
The Sukkot/Simhat Torah Anthology by Philip Goodman
My People: The Story of the Jews by Abba Solomon Eban
Growing up Jewish: An Anthology by Jay David
From Time Immemorial: The Origins of the Arab-Jewish Conflict Over Palestine by Joan Peters
Warrior: An Autobiography by Ariel Sharon
Diary of the Sinai Campaign by Moshe Dayan
A Jew Today by Elie Wiesel
A Certain People: American Jews and Their Lives Today by Charles E. Silberman
Fewer