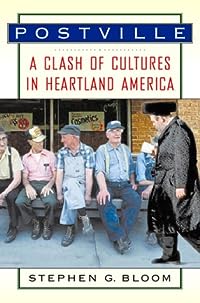 Postville: A Clash of Cultures in Heartland America

In 1987, a group of Lubavitchers, one of the most orthodox and zealous of the Jewish sects, opened a kosher slaughterhouse just outside tiny Postville, Iowa (pop. 1,465). When the business became a worldwide success, Postville found itself both revived and divided. The town's initial welcome of the Jews turned into confusion, dismay, and even disgust. By 1997, the town had engineered a vote on what everyone agreed was actually a referendum: whether or not these Jews should stay. The quiet, restrained Iowans were astonished at these brash, assertive Hasidic Jews, who ignored the unwritten laws of Iowa behavior in almost every respect. The Lubavitchers, on the other hand, could not compromise with the world of Postville; their religion and their tradition quite literally forbade it. Were the Iowans prejudiced, or were the Lubavitchers simply unbearable? Award-winning journalist Stephen G. Bloom found himself with a bird's-eye view of this battle and gained a new perspective on questions that haunt America nationwide. What makes a community? How does one accept new and powerfully different traditions? Is money more important than history? In the dramatic and often poignant stories of the people of Postville - Jew and gentile, puzzled and puzzling, unyielding and unstoppable - lies a great swath of America today.… (more)

LibraryThing member Schmerguls
This paperback edition was published in 2003, before all the tumultuous events which befell the kosher packing plant in Iowa after that. The author is a mostly non-observant Jew who left San Francisco to come to the University of Iowa as a journalism professor. He went to Postville, Iowa--quite a
Show More
long way from Iowa city--many times and in this book he tells about his visits with the ultra-orthodox Jews who ran the kosher packing plant in Postville and with the non-Jewish (mostly Lutheran) people who lived in Postville. He details how he was treated by both groups and in the telling the Hasidic Jews he visited come out as far less likeable than do the non-Jews--leading the book to be attacked by some Jews as anti-Semitic. I found the book fascinating reading and I thought it fairly well-balanced. It is instructive to read the Wikipedia articles on same situation, which detail all the problems found at Postville in the years after 2003, when the mand Bloom had visited ended up being sentenced to many years in prison. Some of the traits that man exhibited and which the book tells of lead one not to be too surprised that he ended up in huge difficulty.
Show Less
2 more
LibraryThing member Talbin
Postville: A Clash of Cultures in Heartland America, by Stephen Bloom, is a fascinating look at what happens when two completely different groups of people live in close quarters. Bloom examines this clash in Postville, a small farming community in northeastern Iowa. In the late 1980's, a group of
Show More
Hasidic Jews from the Chabad-Lubavitch sect purchased a run-down meat processing plant and began producing kosher meat. At first, the white, mostly Lutheran Iowans welcomed the newcomers and the new jobs that came to the town. However, misunderstandings and clashes soon started. According to Bloom, the Lubavitchers do not believe in socializing with Gentiles, and at the same time, Iowans are generally suspicious of strangers. Eventually, Postville became a town divided strictly on religious and cultural lines. Bloom, who up until moving to Iowa City to take a job as a professor at the University of Iowa, had always lived in big cities with a sizable Jewish population. Because he found so few Jewish people in Iowa, Bloom felt drawn to explore the Hasidic community and their relationship with rural Iowans.

At the start of the book, the town is in the verge of voting to annex the land on which the meat processing plant stands. The Hasidim are threatening to pull up stakes and take all their jobs with them if the annexation vote passes. Bloom considers both sides of the issue while interweaving stories about his own experiences as a Jew in Iowa, using them as a touchstone to explore and understand the relationships in Postville.

I really enjoyed this book. As someone from the upper Midwest, I can see what the biases and prejudices of the Postville residents would probably be. I can understand their resistance to newcomers. At the same time, I live in a large, diverse city, so I also understand Bloom's feeling of being an outsider in rural Iowa. Some have criticized Bloom for being "anti-religious" because he eventually admits that he is more sympathetic to the "native" Postville residents. However, I found his exploration of his own Jewishness to be thought-provoking and honest.
Show Less
LibraryThing member mcelhra
This book was about the culture clash in the small town of Postville, IA (population 1500) between the white, Christian locals and the Hasidic Jews who moved in the late 80s and turned an old slaughterhouse into a kosher slaughterhouse. The author is a Reform Jew so he brought an interesting
Show More
perspective to the conflict as someone sort of in the middle of the two extremes living in Postville.

I really liked this book, it reads like a novel. The only thing that bothered me was the author throwing in Yiddish or Hebrew words without always telling me what they meant. The plant in Postville was raided in May 2008 and almost 400 undocumented immigrants, mostly from Somalia and Latin America were removed and yesterday the NYT reported that the plant is defaulting on a $35M loan. A sequel may be in order.
Show Less
Fewer

Jew vs. Jew: The Struggle for the Soul of American Jewry by Samuel G. Freedman
How to Run a Traditional Jewish Household by Blu Greenberg
Boychiks in the Hood: Travels in the Hasidic Underground by Robert Eisenberg
How to Get More Out of Being Jewish even if you are not sure you believe in God, you think going to synagogue is a waste of time, you think keeping kosher is stupid, you hated Hebrew school, or all of the above by Gil Mann
A Certain People: American Jews and Their Lives Today by Charles E. Silberman
21 more
Deborah, Golda, and Me: Being Female and Jewish in America by Letty Cottin Pogrebin
The Vanishing American Jew: In Search of Jewish Identity for the Next Century by Alan M. Dershowitz
Jewish Family & Life traditions, holidays, and values for today's parents and children by Yosef I. Abramowitz
Unchosen: The Hidden Lives of Hasidic Rebels by Hella Winston
Souls on Fire: Portraits and Legends of Hasidic Masters by Elie Wiesel
Judaism as a Civilization: Toward a Reconstruction of American Jewish Life by Mordecai Menahem Kaplan
How We Lived: A Documentary History of Immigrant Jews in American, 1880-1930 by Irving Howe
The Jewish Catalog: A Do-It-Yourself Kit by Richard Siegel
Holy Days: The World of a Hasidic Family by Lis Harris
Chutzpah by Alan M. Dershowitz
World of Our Fathers: The Journey of the East European Jews to America and the Life They Found and Made by Irving Howe
Jewish Renewal: A Path to Healing and Transformation by Michael Lerner
The Big Book of Jewish Humor by William Novak
The Service of the Heart: A Guide to the Jewish Prayer Book by Evelyn Garfiel
Hasidism & Modern Man by Martin Buber
Invisible City by Julia Dahl
Run You Down by Julia Dahl
The Purim Anthology by Philip Goodman
The Mezuzah in the Madonna's Foot: Oral Histories Exploring 500 Years in the Paradoxical Relationship of Spain and the Jews by Trudi Alexy
The Second Jewish Book of Why by Alfred J. Kolatch
Jewish Mothers: Strength, Wisdom, Compassion by Paula Ethel Wolfson
Fewer