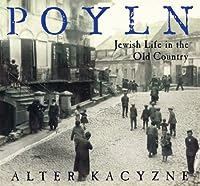 Winner of the National Jewish Book Award In 1921, photographer Alter Kacyzne was comissioned by the New York Yiddish daily, Forverts, to document images of Jewish life in the "old country." Kacyzne's assignment was to become a ten-year journey across "Poyln," as Poland's three million Yiddish-speaking Jews called their home, from the crowded ghettos of Warsaw and Krakow to the remote villages of Otwock and Kazimierz. Candid and intimate, tender and humorous, Kacyzne's portraits - of teeming village squares and primitive workshops,cattle markets and spinning wheels, prayer groups and summer camps - tell the story of a way of life that is no more. For the last sixty years, Kacyzne's Forverts photographs - the sole fragment of his vast archive to survive World War II - lay unseen. Now the work of this lost master is restored to the world in a volume of extraordinary force and beauty.… (more)

A Vanished World by Roman Vishniac
Life Is With People: The Culture of the Shtetl by Mark Zborowski
Shtetl: The Life and Death of a Small Town and the World of Polish Jews by Eva Hoffman
Yiddish: A Nation of Words by Miriam Weinstein
And I Shall Dwell Among Them: Historic Synagogues of the World by Neil Folberg
17 more
Image Before My Eyes: A Photographic History of Jewish Life in Poland, 1864-1939 by Lucjan Dobroszycki
The Shtetl: A Creative Anthology of Jewish Life in Eastern Europe by Joachim Neugroschel
The Jews: A Treasury of Art and Literature by Sharon R. Keller
The Atlas of Jewish History by Martin Gilbert
From Generation to Generation: How to Trace Your Jewish Genealogy and Personal History by Arthur Kurzweil
The Golden Tradition: Jewish Life and Thought in Eastern Europe by Lucy S. Dawidowicz
The Precious Legacy: Judaic Treasures from the Czechoslovak State Collection by David A. Altshuler
World of Our Fathers: The Journey of the East European Jews to America and the Life They Found and Made by Irving Howe
My People: The Story of the Jews by Abba Solomon Eban
Heritage: Civilization and the Jews by Abba Solomon Eban
The Five Books of Miriam: A Woman's Commentary on the Torah by Ellen Frankel
Chutzpah by Alan M. Dershowitz
Photographing the Jewish Nation: Pictures from S. An-sky's Ethnographic Expeditions by Eugene M. Avrutin
Upon the Doorposts of Thy House: Jewish Life in East-Central Europe, Yesterday and Today by Ruth Ellen Gruber
In My Father's Court: A Memoir by Isaac Bashevis Singer
The Big Book of Jewish Humor by William Novak
The Jews in Their Land by David Ben-Gurion
Fewer