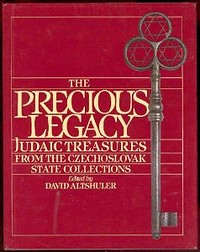 The Precious Legacy: Judaic Treasures from the Czechoslovak State Collection

by David A. Altshuler

"The collection of the Czechoslovak State Jewish Museum in Prague is a unique respository of historic artifacts, artistic rarities, and cultural memories. These objects document the vitality and significance of Czech Jewry, which has flourished for a millennium at the crossroads of East and West and is the oldest continuous Jewish community in Europe. One hundred fifty-three local Jewish communities in Bohemia and Moravia were devastated during the Holocaust, and thus the Prague Museum bears eloquent testimony to a world virtually snuffed out just one generation ago. This book brings to American audiences their first glimpse of this extraordinary collection of Judaica in conjunction with an exhibition that is touring our nation's major museums under the auspices of the Smithsonian Institution Traveling Exhibition Service. The unparalleled size and scope of the Prague collection-- some 140,000 treasures in all-- derive from an ironic twist of fate. From 1942 to 1945, the Nazis confiscated Jewish possessions of artistic and historical value throughout Bohemia and Moravia, and while the Jews of these lands were deported to captivity and death, these artifacts were shipped to Prague. There the Nazis intended to establish a "museum to an extinct race," a pathological "research" and propaganda "institute" that would justify to the world the "Final Solution to the Jewish Question." While nearly all of European Jewry vanished during the Holocaust, Prague was spared from wartime destruction, as was the collection of Judaica that by war's end filled eight historic Jewish sites and more than fifty warehouses throughout the city. Teams of distinguished scholars from the United States and Czechoslovakia participated in the research and writing of this text, which includes studies of the historic and religious legacy of Czech Jewry as well as a catalogue of the landmark exhibition "The Precious Legacy." The volume is magnificently designed, depicting beautiful textiles, oil paintings, glassware, porcelain, precious metals, printed books and illuminated manuscripts in 75 full-color and 150 black-and-white illustrations. These photographs and essays together bear witness to the continuity and beauty of Jewish culture, a tradition that sanctifies life and transcends tragedy and death" --Back cover.… (more)

A Certain People: American Jews and Their Lives Today by Charles E. Silberman
Jewish and Female: Choices and Changes in Our Lives Today by Susan Weidman Schneider
How We Lived: A Documentary History of Immigrant Jews in American, 1880-1930 by Irving Howe
The Jews: A Treasury of Art and Literature by Sharon R. Keller
Great Jews in Sports by Robert Slater
23 more
Life Is With People: The Culture of the Shtetl by Mark Zborowski
The Abandonment of the Jews: America and the Holocaust, 1941-1945 by David S. Wyman
Heritage: Civilization and the Jews by Abba Solomon Eban
Shores of Refuge: A Hundred Years of Jewish Emigration by Ronald Sanders
A Treasury of Jewish Humor: A Classic Collection of Humorous Stories, Satires and Witticism from the Rich Jewish Literature of All Times by Nathan Ausubel
Deborah, Golda, and Me: Being Female and Jewish in America by Letty Cottin Pogrebin
Encyclopedia of Jewish Humor: From Biblical Times to the Modern Age by Henry D. Spalding
The Service of the Heart: A Guide to the Jewish Prayer Book by Evelyn Garfiel
The Purim Anthology by Philip Goodman
The Jews in Their Land by David Ben-Gurion
The Vanishing American Jew: In Search of Jewish Identity for the Next Century by Alan M. Dershowitz
A Treasury of Jewish Folklore stories, traditions, legends, humor, wisdom, and folk songs of the Jewish people by Nathan Ausubel
My People: The Story of the Jews by Abba Solomon Eban
A Vanished World by Roman Vishniac
World of Our Fathers: The Journey of the East European Jews to America and the Life They Found and Made by Irving Howe
Jewish Art and Civilization by Geoffrey Wigoder
A Jew Today by Elie Wiesel
In God's Mirror: Reflections and Essays by Harold M. Schulweis
The Jews of Silence: A Personal Report on Soviet Jewry by Eliezer Wiesel
Gates of Mitzvah: A Guide to the Jewish Life Cycle by Simeon J. Maslin
On Women and Judaism: A View from Tradition by Blu Greenberg
The Big Book of Jewish Humor by William Novak
In the land of Israel by Amos Oz
Fewer