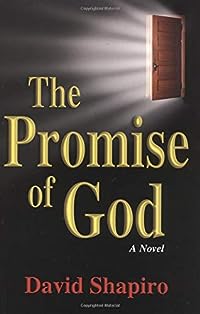 The Promise of God a novel

Mysterious events are happening. Five of the most powerful corporate chairmen in the world have suffered heart attacks and had the same exact vision during their near-death experiences, a word written in an arcane, ancient language they cannot identify. Cold fusion, an unlimited source of energy, has been achieved in Israel but the scientists responsible for it refuse to reveal the formula for its use. Isaac Benda Cortes, a passionate, outspoken Brazilian Cardinal who is one of the two likely candidates to succeed the elderly ailing Pope, is targeted by the drug cartel that he condemns. Cortes' passionate thirst for justice leads to a search for his own origins--a search that leads him to discover the future of Western faith. And, Grant Tyler, the head of the worlds' most powerful media network watches distraught as his beloved wife dies of cancer. What she whispers to him on her deathbed sends him spiraling through an epic odyssey that will unite all the mysterious strand of events and enlighten the world to its destiny. In David Shapiro's first work of fiction, and the first work of fiction for Simcha Press, readers will take an edge-of-their-seat journey into the religious and powerful structures of Brazil, Israel, Rome and the United States. A certain bestseller, The Promise of God is packed with suspense, mystery, romance and intrigue.… (more)