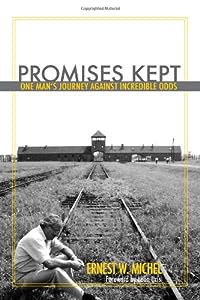 Ernest Michel survived against tremendous odds: his parents and friends were murdered by German Nazis, a fate he only narrowly escaped. After fleeing from the Nazis, he made his way to the United States. But he couldn't forget the promises he'd made to friends, many of whom had died. He has dedicated his life to telling the world what happened in the camps. Among the book's highlights is his description of the Nuremberg War Crimes Trial, as well as his dramatic encounter with Herman Goering.

The Holocaust Years: The Nazi Destruction of European Jewry, 1933-1945 by Nora Levin
Hitler's War Against the Jews: A Young Reader's Version of The War Against the Jews, 1933-1945 by David A. Altshuler
Love Despite Hate: Child Survivors of the Holocaust and Their Adult Lives by Sarah Moskovitz
The Survivor: An Inspiring True Story by Jack Eisner
While Six Million Died: A Chronicle of American Apathy by Arthur D. Morse
8 more
Judenrat: The Jewish Councils in Eastern Europe Under Nazi Occupation by Isaiah Trunk
They Fought Back: The Story of Jewish Resistance in Nazi Europe by Yuri Suhl
Stella: One Woman's True Tale of Evil, Betrayal, and Survival in Hitler's Germany by Peter Wyden
Auschwitz: A Doctor's Eyewitness Account by Miklos Nyiszli
Schindler's Legacy: True Stories of the List Survivors by Elinor J Brecher
The Abandonment of the Jews: America and the Holocaust, 1941-1945 by David S. Wyman
Children of the Holocaust: Conversations with Sons and Daughters of Survivors by Helen Epstein
Elli: Coming of Age in the Holocaust by Livia Bitton Jackson
Fewer