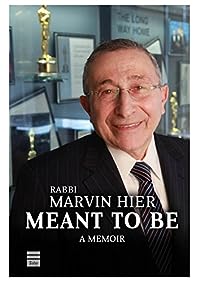 Rabbi Martin Hier: Meant to Be, A Memoir

In Meant to Be, Rabbi Hier recounts the events of his dazzling life: the miraculous birth and growth of the Simon Wiesenthal Center, Moriah Films, and the Museums of Tolerance; the hunt for the Nazi ¿Angel of Death,¿ Josef Mengele; encounters with renowned Jewish sages Rabbi Aharon Kotler, Rabbi Moshe Feinstein and the Gerrer Rebbe; his friendship with Jordan¿s King Hussein; his meetings with every American president ¿ from Jimmy Carter to Barack Obama; and his relationships with Hollywood stars such as Frank Sinatra, Elizabeth Taylor, Billy Crystal, Tom Cruise, Marlon Brando and Michael Douglas. With classic Jewish humor, Rabbi Hier reflects on interplay of instinct, chutzpah and serendipity that have enabled his remarkable achievements, revealing that all that happens is, in fact, meant to be.… (more)