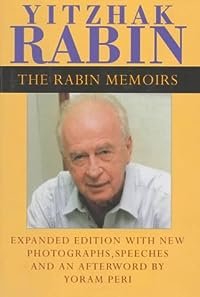 The assassination of Yitzhak Rabin in November of 1995--one year after he shared the Nobel Peace Prize with Yasir Arafat--sent shock waves around the world. Known as both a man of war and of peace, the Jerusalem-born Israeli prime minister played a key role in developing the Jewish state and was instrumental in establishing peace in the Middle East. Yitzhak Rabin's memoirs, first published in 1979 but long out of print, are now available in this expanded edition. They provide a candid appraisal of significant events in Israeli history, and passages censored when the memoirs were first published have been restored. The addition of an afterword by Rabin's political advisor, Yoram Peri, and his most important speeches given after 1979 round out Rabin's life and show the evolution of his beliefs. Rabin writes of his years in the Haganah (the independent Jewish military) and gives a controversial account of the War of Independence. He details the tactical moves that made him a hero in the Six Day War and recalls his years as ambassador to the United States. He tells of his difficult decision to authorize the 1976 rescue of hijacked hostages from the Entebbe airport. Rabin describes the conflicts that eventually led to his party's defeat after thirty years in power, and he concludes with a shrewd assessment of the Israeli-Egyptian peace treaty and of prospects for peace with Israel's other neighbors, including the Palestinians. Yitzhak Rabin's memoirs are important not only for the insider's view they offer about Israel and the Middle East, but also for providing a very human portrait of a heroic world leader. From the book:"Most of you watched that ceremony on the White House lawn with mixed emotions, many of you grinding your teeth. I knew that the hand outstretched to me . . . was the same hand that held the knife, that held the gun, the hand that gave the order to shoot, to kill. Of all the hands in the world, it was not the hand that I wanted or dreamed of touching. . . . On that world stage, I stood as the representative . . . of a state that is willing to give peace a chance. As I have said, one does not make peace with one's friends. One makes peace with one's enemy."--Jerusalem, December 1993… (more)

My Life by Golda Meir
Abba Eban: An Autobiography by Abba Solomon Eban
The Battle for Peace by Ezer Weizman
Ben-Gurion, Prophet of Fire by Dan Kurzman
Ben-Gurion, A Biography by Michael Bar-Zohar
18 more
My Country: The Story of Modern Israel by Abba Solomon Eban
Great Jews in Sports by Robert Slater
Moshe Dayan: Story of My Life by Moshe Dayan
My People: The Story of the Jews by Abba Solomon Eban
Golda by Elinor Burkett
Turbulent Souls: A Catholic Son's Return to His Jewish Family by Stephen J. Dubner
Soldier of peace: The Life of Yitzhak Rabin by Dan Kurzman
In the Name of Sorrow and Hope by Noa Ben Artzi-Pelossof
To Jerusalem and Back: A Personal Account by Saul Bellow
The Siege: The Saga of Israel and Zionism by Conor Cruise O'Brien
Israel: A Personal History by David Ben-Gurion
Akiba: Scholar, Saint and Martyr by Louis Finkelstein
The Jews in Their Land by David Ben-Gurion
Diary of the Sinai Campaign by Moshe Dayan
Chaim Weizmann: A Biography by Norman Rose
Encyclopedia of Jewish Humor: From Biblical Times to the Modern Age by Henry D. Spalding
Bar-Kokhba: The Rediscovery of the Legendary Hero of the Second Jewish Revolt Against Rome by Yigael Yadin
The Jewish World: History and Culture of the Jewish People by Elie Kedourie
Fewer