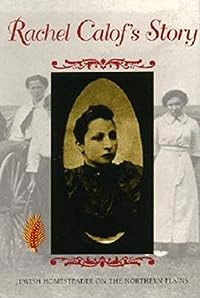 Calof's [story] has the 'electricity' one occasionally finds in primary sources. It is powerful, shocking, and primitive, with the kind of appeal primary sources often attain without effort.... it is a strong addition to the literature of women's experience on the frontier." --Lillian Schlissel In 1894, eighteen-year-old Rachel Bella Kahn travelled from Russia to the United States for an arranged marriage to Abraham Calof, an immigrant homesteader in North Dakota. Rachel Calof's Story combines her memoir of a hard pioneering life on the prairie with scholarly essays that provide historical and cultural background and show her narrative to be both unique and a representative western tale. Her narrative is riveting and candid, laced with humor and irony. The memoir, written by Rachel Bella Calof in 1936, recounts aspects of her childhood and teenage years in a Jewish community, (shtetl) in Russia, but focuses largely on her life between 1894 and 1904, when she and her husband carved out a life as homesteaders. She recalls her horror at the hardships of pioneer life--especially the crowding of many family members into the 12 x 14' dirt-floored shanties that were their first dwellings. "Of all the privations I knew as a homesteader," says Calof, "the lack of privacy was the hardest to bear." Money, food, and fuel were scarce, and during bitter winters, three Calof households--Abraham and Rachel with their growing children, along with his parents and a brother's family--would pool resources and live together (with livestock) in one shanty. Under harsh and primitive conditions, Rachel Bella Calof bore and raised nine children. The family withstood many dangers, including hailstorms that hammered wheat to the ground and flooded their home; droughts that reduced crops to dust; blinding snowstorms of plains winters. Through it all, however, Calof drew on a humor and resolve that is everywhere apparent in her narrative. Always striving to improve her living c… (more)

LibraryThing member Rdra1962
If you ever find yourself feeling sorry for yourself; read this book! If your kids are complaining about sharing a room, not having the hot clothes/shoes/electronics/vacations etc; make them read this book. If you enjoy reading about American/Jewish/Women's/settler's/immigrant's history, read this
Show More
book! An amazing memoir of a woman who endures a horrible childhood in Russia only to move to the US, and then, becomes a homesteader on North Dakota. Translated by her son, Rachel gives a riveting account of her first years in the frigid, remote setting. She writes sparingly, but with great impact. There is additional info and insight by her son and two professors to enhance her memoir.

The book is a short read that you will never forget!
Show Less

Deborah, Golda, and Me: Being Female and Jewish in America by Letty Cottin Pogrebin
Great Jews in Sports by Robert Slater
The Purim Anthology by Philip Goodman
Great Jewish Women by Elinor Slater
Stars of David: Prominent Jews Talk About Being Jewish by Abigail Pogrebin
7 more
A Convenient Hatred: The History of Antisemitism by Phyllis Goldstein
A Candle for Grandpa: A Guide to the Jewish Funeral for Children and Parents by David Techner
Leo Rosten's Treasury of Jewish Quotations by Leo Calvin Rosten
Gates of Mitzvah: A Guide to the Jewish Life Cycle by Simeon J. Maslin
From Generation to Generation: How to Trace Your Jewish Genealogy and Personal History by Arthur Kurzweil
The Jews: A Treasury of Art and Literature by Sharon R. Keller
The Mezuzah in the Madonna's Foot: Oral Histories Exploring 500 Years in the Paradoxical Relationship of Spain and the Jews by Trudi Alexy
Fewer