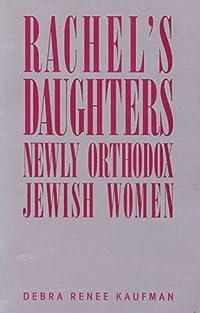 "An engrossing account of the appeal of religious orthodoxy to formerly secular women, many of them once feminist, radical members of the counterculture. . . . This outstanding work of scholarship reads with the immediacy of a novel."ÐÐCynthia Fuchs Epstein, author of Deceptive Distinctions: Sex, Gender, and the Social Order  Debra Kaufman writes about ba'alot teshuva women who have returned to Orthodox Judaism, a form of Judaism often assumed to be oppressive to women. She addresses many of the most challenging issues of family, feminism, and gender. Why, she asks, have these women chosen an Orthodox lifestyle?  What attracts young, relatively affluent, well-educated, and highly assimilated women to the most traditional, right-wing, patriarchal, and fundamentalist branch of Judaism?  The answers she discovers lead her beyond an analysis of religious renewal to those issues all women and men confront in public and private life. Kaufman interviewed and observed 150 ba'alot teshuva. She uses their own stories, in their own words, to show us how they make sense of the choices they have made.  Lamenting their past pursuit of individual freedom over social responsibility, they speak of searching for shared meaning and order, and finding it in orthodoxy.  The laws and customs of Orthodox Judaism have been formulated by men, and it is men who enforce those laws and control the Orthodox community. The leadership is dominated by men. But the women do not experience theologically-imposed subordination as we might expect. Although most ba'alot teshuva reject feminism or what they perceive as feminism, they maintain a gender consciousness that incorporates aspects of feminist ideology, and often use feminist rhetoric to explain their lives. Kaufman does not idealize the ba'alot teshuva world. Their culture does not accommodate the non-Orthodox, the homosexual, the unmarried, the divorced. Nor do the women have the mechanisms or political power to reject what is still oppressive to them. They must live within the authority of a rabbinic tradition and social structure set by males. Like other religious right women, their choices reinforce authoritarian trends current in today's society. Rachel's Daughters provides a fascinating picture of how newly orthodox women perceive their role in society as more liberating than oppressive.… (more)

On Women and Judaism: A View from Tradition by Blu Greenberg
Jewish Woman in Jewish Law by Moshe Meiselman
The Invisible Thread: A Portrait of Jewish American Women by Diana Bletter
Jewish Mothers: Strength, Wisdom, Compassion by Paula Ethel Wolfson
Deborah, Golda, and Me: Being Female and Jewish in America by Letty Cottin Pogrebin
20 more
Jewish and Female: Choices and Changes in Our Lives Today by Susan Weidman Schneider
Holy Days: The World of a Hasidic Family by Lis Harris
On Being a Jewish Feminist by Susannah Heschel
How to Run a Traditional Jewish Household by Blu Greenberg
The Jewish Woman: New Perspectives by Elizabeth Koltun
Jew vs. Jew: The Struggle for the Soul of American Jewry by Samuel G. Freedman
The Woman Who Laughed at God: The Untold History of the Jewish People by Jonathan Kirsch
The Jewish Book of Why by Alfred J. Kolatch
The Vanishing American Jew: In Search of Jewish Identity for the Next Century by Alan M. Dershowitz
The Five Books of Miriam: A Woman's Commentary on the Torah by Ellen Frankel
Unchosen: The Hidden Lives of Hasidic Rebels by Hella Winston
To Life! A Celebration of Jewish Being and Thinking by Harold S. Kushner
Rereading the Rabbis: A Woman's Voice by Judith Hauptman
This Is My God by Herman Wouk
Rashi's Daughters - Book I: Joheved by Maggie Anton
Becoming A Jew by Maurice Lamm
What is a Jew? by Morris Norman Kertzer
The Hanukkah Anthology by Philip Goodman
The Jew in the Lotus: A Poet's Rediscovery of Jewish Identity in Buddhist India by Rodger Kamenetz
The Thirteen Petalled Rose by Adin Steinsaltz
Fewer