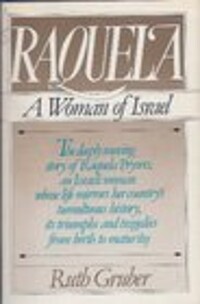 Raquela, A Woman of Israel

A National Jewish Book Award-winning biography: A look at the early years of Israel's statehood, experienced through the life of a pioneering nurse. During her extraordinary career, nurse Raquela Prywes was a witness to history. She delivered babies in a Holocaust refugee camp and on the Israeli frontier. She crossed minefields to aid injured soldiers in the 1948 Arab-Israeli War and organized hospitals to save the lives of those fighting the 1967 Six-Day War. Along the way, her own life was a series of triumphs and tragedies mirroring those of the newly formed Jewish state. Raquela is a moving tribute to a remarkable woman, and an unforgettable chronicle of the birth of Israel through the eyes of those who lived it.

Great Jews in Sports by Robert Slater
Myths and Facts: A Guide to the Arab-Israeli Conflict by Mitchell G. Bard
To Raise a Jewish Child: A Guide for Parents by Hayim Donin
Remarkable Jewish Women: Rebels, Rabbis, and Other Women from Biblical Times to the Present by Emily Taitz
Abba Eban: An Autobiography by Abba Solomon Eban
20 more
In the Name of Sorrow and Hope by Noa Ben Artzi-Pelossof
A History of the Jews: From the Babylonian Exile to the Present by Solomon Grayzel
In the land of Israel by Amos Oz
To Jerusalem and Back: A Personal Account by Saul Bellow
The Third Jewish Catalog: Creating Community by Sharon Strassfeld
Self-Portrait of a Hero: The Letters of Jonathan Netanyahu (1963-1976) by Yonatan Netanyahu
The Lemon Tree: An Arab, a Jew, and the Heart of the Middle East by Sandy Tolan
Ben-Gurion, Prophet of Fire by Dan Kurzman
From Time Immemorial: The Origins of the Arab-Jewish Conflict Over Palestine by Joan Peters
The Jewish Woman: New Perspectives by Elizabeth Koltun
My Life by Golda Meir
My Name is Rachamim by Jonathan P. Kendall
Deborah, Golda, and Me: Being Female and Jewish in America by Letty Cottin Pogrebin
Growing up Jewish: An Anthology by Jay David
The Junior Jewish Encyclopedia by Naomi Ben-Asher
The Mezuzah in the Madonna's Foot: Oral Histories Exploring 500 Years in the Paradoxical Relationship of Spain and the Jews by Trudi Alexy
Mingled Roots: A Guide for Jewish Grandparents of Interfaith Grandchildren by Sunie Levin
From Generation to Generation: How to Trace Your Jewish Genealogy and Personal History by Arthur Kurzweil
Chutzpah by Alan M. Dershowitz
How to Get More Out of Being Jewish even if you are not sure you believe in God, you think going to synagogue is a waste of time, you think keeping kosher is stupid, you hated Hebrew school, or all of the above by Gil Mann
Fewer