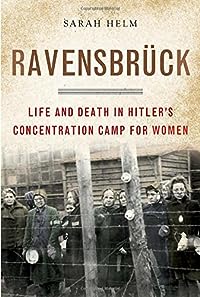 Ravensbruck: Life and Death in Hitler's Concentration Camp for Women

On a sunny morning in May 1939 a phalanx of 800 women - housewives, doctors, opera singers, politicians, prostitutes - were marched through the woods fifty miles north of Berlin, driven on past a shining lake, then herded through giant gates. Whipping and kicking them were scores of German women guards. Their destination was Ravensbrück, a concentration camp designed specifically for women by Heinrich Himmler, prime architect of the Nazi genocide. For decades the story of Ravensbrück was hidden behind the Iron Curtain and today is still little known. Using testimony unearthed since the end of the Cold War, and interviews with survivors who have never spoken before, Helm has ventured into the heart of the camp, demonstrating for the reader in riveting detail how easily and quickly the unthinkable horror evolved.… (more)

LibraryThing member knightlight777
I was at first a bit reluctant to read this book as I got the feel from the first pages it would be one of these interview account types, not to mention the depressing subject matter. But I am glad I persevered and experienced the awareness of what these women endured under the most horrific
Show More
conditions.

It was at times hard to grasp just how inhumane humans can be towards helpless, defenseless victims. The suffering was endless not only from their German captors but for many atrocities from the Russian liberators, and in some cases Communists reprisals in their native lands. Adding to this burden were those who escaped justice and punishment as well as the silence and cover up. It is hard to imagine a worse ordeal of the countless who lost their lives and those who lived and live with the memory. This is the type of book that should be required reading at the high school level to leave a lasting impression.
Show Less
5 more
LibraryThing member mumfie
This is an enthralling book, with some chapters extremely uncomfortable. But it needs to be written.

As a women's camp it received a lot less attention, publicity, recognition after the war which means all these women risk being forgotten and unacknowledged. It was a multi-cultural camp, with women
Show More
of multiple nationalities as well as a mixture of politicos, prostitutes and the mentally disabled, let alone those who went insane whilst there. Several SOE agents ended up there. Women were frozen or starved to death, shot and gassed. Some were experimented on.

And yet the book describes the communities within the camp, the friendships and the mutual support given to each other. Writing sympathetically about the women's stories without minimising the horrors they lived through is challenging.

If the subject matter was different, I could have said this was a pleasure to read. It wasn't but it was certainly riveting.
Show Less
LibraryThing member decore
Excellent and incredibly well-researched book. Read copy from Stonnington Jul15
LibraryThing member larryerick
It's taken a while for me to figure this out about writing reviews for books I read, but the better the book, the harder it is for me to review it. Do I just say, "Wow, that was great!", and hope the person reading my review just takes my word for it? Not even my wife trusts me that much. So, no.
Show More
Do I explain in detail why I think it's great, taking page after page to layout the book's many attributes? Nah. I need that time reading more books, and, after all, nobody likes me enough to read that much of what I have to say, so, also no. So, what can I say about this epic tome? It is epic, after all. Yet, one look at the book's subtitle, and most people I know wouldn't think twice about reading it, or should I say not reading it. Think Hitler and concentration camp, and I dare say the vast number of American's will think "Jews", "gassing", and probably Auschwitz. Who wants to read nearly 700 pages of assembly-line genocide? The thing is, this book is not even close to being that. First, it is unique, being about the Nazi concentration camp for women. Two, it very quickly fills the reader in on the breadth of depravity the Nazis had for a vast array of non-Jews, or should I say more precisely, non-Aryans, and even Aryans with "worthless lives" and any Aryan who may not support this depravity with full measure of vigor. Third, it acknowledges and points out the reaction within the camp to the various stages of this depravity, without specifying the cause of those stages. Emphasis of the Jewish genocide increased as German armies went toward and into Russia. The emphasis on merely killing anyone unable to walk, came when those Soviet armies won at Stalingrad, stopped Hitler from getting critical access to oil fields and started overrunning other concentration camps besides the women's camp. The author does not cite those events, but the reaction at the camp is obvious. Third, and perhaps most importantly, the author, who did masterful work both in document research and a multitude of personal interviews, lets the reader know in complex, intimate narrative about the persistent, creative, intelligent, empathetic, heroic ways many of the women in this camp, survived, if they could, and helped others survive, if they themselves could not. The idea of women as the "fairer sex" will be forever ripped from your brain, indeed if it was ever there. The deaths of so many of these women, regardless of their religion, nationality, politics, or vocation, is tragic beyond measure, but it was the will of them to withstand, to survive, that deeply colors my view of what the author has written. The book is like a great novel. I expect it to resonate with me not for just a long time, but forever.
Show Less
LibraryThing member marshapetry
Don't pick as your first ww2 book, difficult to read. Definitely with the read however. This and KL (can't remember author's name) were pretty gritty but definite recommends
LibraryThing member decore
Excellent and incredibly well-researched book. Read copy from Stonnington Jul15
Fewer

How Mankind Committed the Ultimate Infamy at Auschwitz: A New History by Laurence Rees
Escape from Sobibor by Richard L. Rashke
Village of Secrets: Defying the Nazis in Vichy France by Caroline Moorehead
History on Trial: My Day in Court with a Holocaust Denier by Deborah E. Lipstadt