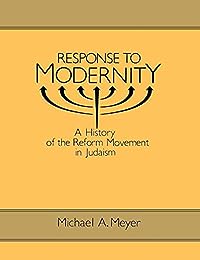 Response to Modernity: A History of the Reform Movement in Judaism

by Michael A. Meyer

The movement for religious reform in modern Judaism represents one of the most significant phenomena in Jewish history during the last two hundred years. Bringing to life the ideas, issues, and personalities that have helped to shape modern Jewry, Response to Modernity offers a comprehensive and balanced history of the Reform movement. Michael Meyer traces the movement's changing configuration and self-understanding from the late eighteenth-century to Reform's American renewal in the 1970s. In colorful detail, he follows its spread throughout Europe and America and interprets Reform's response to such important influences as Protestantism, biblical criticism, and Darwinism. Response to Modernity provides the broadest possible understanding of this fascinating and little-explored area of religious history.… (more)