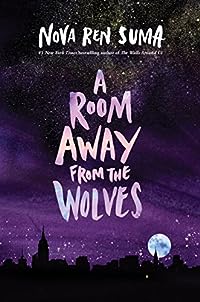 A Room Away from the Wolves

"Shiver-inducingly delicious."--The New York Times Book Review "[Suma's] narratives are subtle, quicksilver creatures, her language is elegant, and her characters keep more secrets than they reveal. If this book was a dessert, it wouldn't be a chocolate chip cookie or a vanilla birthday cake -- it would be an earl grey lavender macaroon, or maybe balsamic fig ice cream." - NPR.com   "This beautiful story is full of magical-realism and luscious, lyrical writing." - BuzzFeed "Terrific . . . A gothic love letter to secret places of New York City and the runaway girls who find them."--Kelly Link, author of Pulitzer Prize finalist Get in Trouble "Nova Ren Suma surpasses herself with this gorgeously-told, mesmerizing, tense and twisted story."-- Laura Ruby, National Book Award Finalist and Printz-Winning author of Bone Gap "Nova Ren Suma is a force to be reckoned with. Nobody writes like her."--Courtney Summers, author of Sadie "A Room Away From the Wolves is a page-turning thrill.  Prepare to be left shivery and spooked and a little bit heartbroken."--Emily X.R. Pan, New York Times bestselling author of The Astonishing Color of After "A Room Away from the Wolves is a beautifully tangled chain, a modern gothic haunting by one of our masters."--Elana K. Arnold, author of National Book Award finalist What Girls Are Made Of Bina has never forgotten the time she and her mother ran away from home. Her mother promised they would hitchhike to the city to escape Bina's cruel father and start over. But before they could even leave town, Bina had a new stepfather and two new stepsisters, and a humming sense of betrayal pulling apart the bond with her mother--a bond Bina thought was unbreakable. Eight years later, after too many lies and with trouble on her heels, Bina finds herself on the side of the road again, the city of her dreams calling for her. She has an old suitcase, a fresh black eye, and a room waiting for her at Catherine House, a young women's residence in Greenwich Village with a tragic history, a vow of confidentiality, and dark, magical secrets. There, Bina is drawn to her enigmatic downstairs neighbor Monet, a girl who is equal parts intriguing and dangerous. As Bina's lease begins to run out, and nightmare and memory get tangled, she will be forced to face the terrible truth of why she's come to Catherine House and what it will cost for her to leave . . . In A Room Away from the Wolves, critically acclaimed and New York Times bestselling author Nova Ren Suma weaves a spellbinding ghost story about who deserves a second chance, how we lie to those around us and ourselves, and what lengths girls will go to in order to save each other.… (more)

LibraryThing member kamoorephoto
This wonderful story has one step inside reality, and the other is deep inside somewhere quite otherworldly, which is also somewhere that Nova Ren Suma’s writing sits. Her writing is what gives this simple tale of a young girl ‘Bina’, who runs away from home to a boarding house in New York
Show More
City, so much character, originality, and mystery.
Bina and her mother fled their home once before, last time to escape her cruel father. They never made it beyond the home Bina has to share now with a stepfather and two stepsisters that eventually has become a new hell she’s decided she must escape on her own. Bruised inside and out, she feels betrayed and let down by her mom, and sees no other way.

Eight years after her and mother once ran from her father, she heads for Catherine House, the place she heard so many stories about from her mom, and asks for the very room that she stayed in.
From the moment Bina arrives in Greenwich Village, something is strange, and somehow connected to the opal ring her mother gave her, and to the original owner of the house, Catherine herself.

I don’t want to go into too much explanation of the story because there would be too much given away. I’ll lead this by saying that if you like your stories served up on a platter, without beautiful prose laden with wonderful imagery, this may not be the book for you. Suma writes with so much mesmerizing imagery wrapped in every sentence, that you’ll miss half of the tale she’s written for you if you don’t dig a little deeper.

This is a modern ghost story as well as a heart-breaking tale about the connection between mother and daughter, and how families make mistakes and let each other down. This part of the book is the guts of why Bina ends up Catherine House, and made me long for my own mom who is thousands of miles away.

Bina feels betrayed by her mom and looks to her mother’s past for answers, but there’s so much that’s tragic about this; reading the book it felt like Bina carries such a weight for a young girl, but doesn’t truly complain. It’s especially tragic because her father has already let her down, and she’s now being bullied by her stepsisters.

The other characters in the novel bring out all sorts of thoughts and memories for her: Monet is the girl in the room below, and is a fascinating character and one who Bina is drawn to, without explanation. She makes Bina question everything and gives her clues as to what is really happening.

There are twists and portals and thrills in this novel that make it a page-turner, and it’s as beautiful as it is heart-wrenching. There’s some spookiness that might make you feel like you’re not alone when you’re reading this (maybe you’re not).

*Bonus points: cats involved!
*Trigger warning: suicidal ideation
Show Less
5 more
LibraryThing member lilibrarian
After trouble with her stepsisters and a string of bad behavior, Bina is leaving home. She heads for New York City to a boarding house that features in many of her mother's stories. But once there, she finds that leaving is not as easy as she thought.
LibraryThing member CatherineHsu
*Thank you to the publishers for a free copy in exchange for an honest review!*

I am such a fan of Nova Ren Suma’s writing. It’s always gorgeous and perpetually confusing and I just LOVE it.

A Room Away From the Wolves is honestly no different. This story follows Bina, short for Sabina, who
Show More
suddenly finds herself kicked out of her own home (temporarily). And it’s nothing new – when she was little, she and her mother ran away and began their own hitchhiking journey. Eighteen years ago, Bina’s mother had taken refuge at Catherine House. Now, Bina returns, but she finds that there are things about the house – and about her mother – that she never knew.

Nova Ren Suma’s writing style has consistently been one of my favorites, especially when it comes to magical realism type stories – she does a great job balancing concrete and abstract language, which is even more powerful because I found myself questioning it all – Is it real? Is it in the character’s head?

The plot is magical, and I’ve finished reading the book, true. But I’m still confused, and in a good way. This is one of those books you’d want to reread immediately after, because you hope that maybe the second time around, you’ll get more answers. A Room Away From the Wolves filled me with the best kind of trepidation.

Bina is an extremely flawed main character, and that’s good because it’s more realistic, and yet because of that I found myself frustrated at her actions, while still symp/empathizing with her. There were definitely other characters that I wanted to know more about and wanted to see more of, but this book does leave room for lots of imagination.

Other than that, I would recommend this book to readers of magical realism and fantasy – it’s got a mysterious vibe to it while simultaneously being able to juggle a setting in the contemporary world.
Show Less
LibraryThing member nframke
“Maybe you thought you knew something you don’t. Something you can’t know yet. Because you’re not supposed to.”

Nova Ren Suma’s A Room Away from the Wolves can be summed up entirely by this quote, for both the protagonist and the reader. Categorized as magical realism, the story opens
Show More
with a girl jumping from the roof of a building only to get up from the cracked concrete and walk away unharmed. Strange things continue to happen as the story goes on, such as photographs that move of their own accord, the mandatory curfew and what happens if its missed, and the strange door Bina’s room with a staircase leading to nowhere.

Main character Sabina, or Bina for short, simultaneously both runs away and is expunged from her home. She seeks out Catherine House, a boarding house for girls, where her mother sought refuge as a young woman. This is really the clearest part of the story, Bina’s need for independence and fondness for her mother. She’s constantly told she won’t know things until she’s ready, excluded from social circles of the other girls in the house, and seems to be in a perpetual state of confusion. Unfortunately, this is also how the reader feels for most of the novel. The story poses more questions than answers even upon reaching the unsatisfactory ending.

For those who’ve read Suma’s superbly written The Walls Around Us, they’ll likely recognize the same kinds of patterns emerge and have an inkling of what’s not being revealed, or rather implied, until the close of the story. That is where the similarities end though. A Room Away from the Wolves offers a poetic writing style for readers intrigued by a book’s language, but apart from that, readers end the story feeling like they’re in a room away from clarity.
Show Less
LibraryThing member PagesandPieces
This book was very well written, haunting, and atmospheric. I would have rated it with more stars, but I'm still not quite sure what to make of it. My questions weren't really answered at the end, and while I understand the need for the unreliable narrator, I don't enjoy books written in this
Show More
style.

This book is a celebration of New York City and unique friendships. The flawed main character is relatable for teens, and the classic gothic mystery characteristics are fun and spooky. The characters are a secretive and mysterious and though there isn't a lot of action, you are invested in learning more. Unfortunately, though there is a great twist, the ending is unsatisfying.
Show Less
LibraryThing member dreamweaversunited
I really wanted to like this book, as it's well-written and it portrays a sad and desperate childhood with a deft hand, but I found the book so confusing I couldn't follow what was going on most of the time. I feel like the author was trying to enhance the horror movie feel by having things skip
Show More
around and be non-linear and not fit together, but I abandoned the book 40% through because it made my brain hurt.
Show Less
Fewer