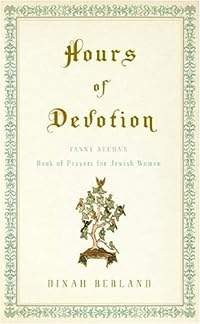 Written in the nineteenth century, rediscovered in the twenty-first, timeless in its wisdom and beauty, Hours of Devotion by Fanny Neuda, (the daughter of a Moravian rabbi), was the first full-length book of Jewish prayers written by a woman for women. In her moving introduction to this volume--the first edition of Neuda’s prayer book to appear in English for more than a century--editor Dinah Berland describes her serendipitous discovery of Hours of Devotion in a Los Angeles used bookstore. She had been estranged from her son for eleven years, and the prayers she found in the book provided immediate comfort, giving her the feeling that someone understood both her pain and her hope. Eventually, these prayers would also lead her back to Jewish study and toward a deeper practice of her Judaism. Originally published in German, Fanny Neuda’s popular prayer book was reprinted more than two dozen times in German and appeared in Yiddish and English editions between 1855 and 1918. Working with a translator, Berland has carefully brought the prayers into modern English and set them into verse to fully realize their poetry. Many of these eighty-eight prayers, as well as Neuda’s own preface and afterword, appear here in English for the first time, opening a window to a Jewish woman’s life in Central Europe during the Enlightenment. Reading “A Daughter’s Prayer for Her Parents,” “On the Approach of Childbirth,” “For a Mother Whose Child Is Abroad,” and the other prayers for both daily and momentous occasions, one cannot help but feel connected to the women who’ve come before. For Berland, Hours of Devotion served as a guide and a testament to the mystery and power of prayer. Fanny Neuda’s remarkable spirit and faith in God, displayed throughout these heartfelt prayers, now offer the same hope of guidance to others.… (more)

The Service of the Heart: A Guide to the Jewish Prayer Book by Evelyn Garfiel
On Women and Judaism: A View from Tradition by Blu Greenberg
With a Camera in the Ghetto by Mendel Grossman
The Story of Jewish Philosophy by Joseph L. Blau
To Pray as a Jew: A Guide to the Prayer Book and the Synagogue Service by Hayim Donin
8 more
The Rosh Hashanah Anthology by Philip Goodman
Pink Slippers, Bat Mitzvah Blues by Ferida Wolff
Your Jewish Lexicon: Some Words and Phrases in Jewish Life and Thought in Hebrew and English by Edith Samuel
The Modern Jewish Mom's Guide to Shabbat: Connect and Celebrate -- Bring Your Family Together with the Friday Night Meal by Meredith L. Jacobs
The Second Jewish Book of Why by Alfred J. Kolatch
To Raise a Jewish Child: A Guide for Parents by Hayim Donin
Saying Kaddish: How to Comfort the Dying, Bury the Dead & Mourn As a Jew by Anita Diamant
Shemoneh Esrei: The Amidah - The Eighteen Blessings inspirational expositions and interpretations of the weekday Shemoneh Esrei by Avrohom Chaim Feuer
Fewer