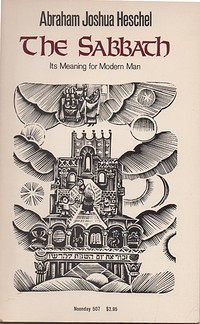 The Sabbath: Its Meaning for Modern Man

Elegant, passionate, and filled with the love of God's creation, Abraham Joshua Heschel's The Sabbath has been hailed as a classic of Jewish spirituality ever since its original publication - and has been read by thousands of people seeking meaning in modern life. In this brief yet profound meditation on the meaning of the Seventh Day, Heschel, one of the most widely respected religious leaders of the twentieth century, introduced the influential idea of an 'architecture of holiness" that appears not in space but in time. Judaism, he argues, is a religion of time: it finds meaning not in space and the materials things that fill it but in time and the eternity that imbues it, so that 'the Sabbaths are our greatcatherdrals.'

LibraryThing member homeschoolmimzi
This was probably one of the most inspiring books I've read. A short book, it is full of rich, deep truths and insights. Heschel talks at length about time and space, and leads the reader into some philosophical worlds which are exciting and new. The meaning of the Sabbath- rest, holiness,
Show More
sanctuary and peace- is explored and delved into here, like no other book I've read on the subject. The only parts where I got a bit lost were when Heschel would quote from works by other rabbis- texts I was unfamiliar with. But this didn't hinder my understanding. I highly recommend this book to anyone who longs for rest, for a meaningful Sabbath, for a break from the busyness, corruption and weariness of the world, especially during this election season!
Show Less
5 more
LibraryThing member cbradley
Abraham Heschel draws an image of the Sabbath from both the Hebrew Bible and the rabbinic interpretations of the scriptures to expound on the idea of the Sabbath being a sanctification of eternal time rather than temporal place. The Sabbath in this sense is not seen so much as a day of rest but as
Show More
a completion of creation, a necessary part of the whole. The culmination of Heschel’s idea of Sabbath is that Sabbath connects the finite nature of the world with the eternity of time.

The origin of Sabbath rest, according to Heschel, comes from god’s resting on the seventh day of creation. The seventh day however is not just denoted by rest in scripture but by three distinct actions on God’s part; rest, blessing, and a hallowing of the day. Thus the seventh day is not simply a day of rest, but a day with a special significance, not just good as the first six days were, but holy in and of itself. Heschel also describes how the Sabbath did not come about after creation was finished, but as an integral part of the creative order. The day of rest is not a day set aside from creation but an act of creation itself.
Show Less
LibraryThing member KimBooSan
Absolutely beautiful book about the concept of "sacred time" as opposed to "sacred space." It resonated a lot with me, even as an atheist, because it was focused on how we choose to perceive the reality of time around us. Whether you think sacred time is blessed by a supernatural being, or if, like
Show More
me, you believe that is a gift we give ourselves, this book has something in it for you. Gorgeously written.
Show Less
LibraryThing member nicholasjjordan
I've intended to read this book for years, but I didn't expect it to be what it is: Jewish philosophy. It's not a practical book on practicing Sabbath, but meditations on the Sabbath by one who has experienced it. It has some strong insights, and I think it might merit a reread down the line, but I
Show More
didn't love it.
Show Less
LibraryThing member SGTCat
Considering the book's reputation, I expected a lot more. The prose was long winded and sometimes the author stated something that doesn't really make sense, logically, but presented it as being the logical conclusion of his argument. It took me years to finish it because I kept falling asleep.
LibraryThing member John_Warner
Thus the heavens and the earth were finished, and all their multitude. And on the seventh day God finished the work that he had done, and he rested on the seventh day from all the work that he had done. So God blessed the seventh day and hallowed it, because on it God rested from all the work that
Show More
he had done in creation. Genesis 2:1-3 NRSV

Considered a classic of Jewish spirituality, The Sabbath: Its Meaning for Modern Man is an elegant and beautifully-written treatise seeking to renew a sanctification of time. Rabbi Heschel distinguishes between space and time, the former within the realm of man, the latter lies within the realm of God.

This theological study possessed so many "aha" moments, I found myself frequently highlighting the various arguments. Not surprising, I discerned a number of connections with our Christian theology.
Show Less
Fewer

God in Search of Man: A Philosophy of Judaism by Abraham Joshua Heschel
The Prophets two volumes in one by Abraham Joshua Heschel
Judaism's 10 Best Ideas: A Brief Guide for Seekers by Arthur Green
To Pray as a Jew: A Guide to the Prayer Book and the Synagogue Service by Hayim Donin
Jewish Literacy: The Most Important Things to Know About the Jewish Religion, Its People, and Its History by Joseph Telushkin
23 more
The Modern Jewish Mom's Guide to Shabbat: Connect and Celebrate -- Bring Your Family Together with the Friday Night Meal by Meredith L. Jacobs
To Be a Jew: A Guide to Jewish Observance in Contemporary Life by Hayim Donin
Living a Jewish Life: Jewish Traditions, Customs, and Values for Today's Families by Anita Diamant
How to Run a Traditional Jewish Household by Blu Greenberg
To Life! A Celebration of Jewish Being and Thinking by Harold S. Kushner
The Five Books of Miriam: A Woman's Commentary on the Torah by Ellen Frankel
Back to the Sources: Reading the Classic Jewish Texts by Barry W. Holtz
The Jewish Way: Living the Holidays by Irving Greenberg
The Sabbath: A Guide to Its Understanding and Observance by I. Grunfeld
The Jewish Book of Why by Alfred J. Kolatch
Finding God: Ten Jewish Responses ten Jewish responses by Rifat Sonsino
Jewish Renewal: A Path to Healing and Transformation by Michael Lerner
As a Driven Leaf by Milton Steinberg
The New Jewish Wedding by Anita Diamant
The Jewish Catalog: A Do-It-Yourself Kit by Richard Siegel
Sacred Fragments: Recovering Theology for the Modern Jew by Neil Gillman
Everyman's Talmud: The Major Teachings of the Rabbinic Sages by A. Cohen
The Thirteen Petalled Rose by Adin Steinsaltz
The Essential Talmud by Adin Steinsaltz
Jewish Meditation: A Practical Guide by Aryeh Kaplan
The Art of Jewish Living: The Passover Seder by Ron Wolfson
Days of Awe: A Treasury of Traditions, Legends and Learned Commentaries Concerning Rosh Ha-Shanah, Yo Kippur and the Days Between by Shmuel Yosef Agnon
The Jew in the Lotus: A Poet's Rediscovery of Jewish Identity in Buddhist India by Rodger Kamenetz
Fewer