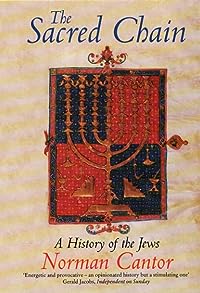 The Sacred Chain: A History of the Jews

"The Sacred Chain is the most comprehensive, readable, up-to-date history of the Jews in the English language. The focus is on how a Jewish identity and consciousness were created, perpetuated, and shaped through three millennia of tumultuous and complex development. Norman F. Cantor sees the Jews as a distinctive ethnic group, rising from anthropological and sociological sources in ancient times. Then, molded in part by interaction with other societies, the Jews developed a unique and persistent culture, behavior pattern, and mind-set. Cantor regards Jewish history as embracing all people regarded by themselves or others as Jews and argues that there is a distinctive Jewish sense and sensibility that are apparent among Jews assimilated to other cultures and converted to other religions, as well as among those who have remained loyal to traditional religion. This book is certain to generate an intense public debate on the meaning of Jewish ethnicity and the significance of Jewish history."--BOOK JACKET.Title Summary field provided by Blackwell North America, Inc. All Rights Reserved… (more)

The Illustrated History of the Jewish People by N. R. M. De Lange
The Jewish World: History and Culture of the Jewish People by Elie Kedourie
The Jews of Arab Lands: A History and Source Book by Norman A. Stillman
My People: The Story of the Jews by Abba Solomon Eban
The Jews in Their Land by David Ben-Gurion
21 more
A History of the Jews by Paul Johnson
The Mystery of Being Jewish by Molly Cone
Mingled Roots: A Guide for Jewish Grandparents of Interfaith Grandchildren by Sunie Levin
Finding God: Ten Jewish Responses ten Jewish responses by Rifat Sonsino
Jewish Days: A Book of Jewish Life and Culture Around the Year by Francine Klagsbrun
The Jewish Family Book by Sharon Strassfeld
The Timechart History of Jewish Civilization by Trudy Gold
A Certain People: American Jews and Their Lives Today by Charles E. Silberman
Jewish People, Jewish Thought: The Jewish Experience in History by Robert M. Seltzer
Great Jews in Sports by Robert Slater
Putting God on the Guest List: How to Reclaim the Spiritual Meaning of Your Child's Bar or Bat Mitzvah by Jeffrey K. Salkin
Wanderings: Chaim Potok's History of the Jews by Chaim Potok
A History of the Jewish People by Haim Hillel Ben-Sasson
A History of the Jewish Experience Book 1, Torah and history : Book 2, Torah, mitzvot, and Jewish thought by Leo Trepp
The Jews in America by David Cohen
Life Is With People: The Culture of the Shtetl by Mark Zborowski
The Rosh Hashanah Anthology by Philip Goodman
A Vanished World by Roman Vishniac
The Mezuzah in the Madonna's Foot: Oral Histories Exploring 500 Years in the Paradoxical Relationship of Spain and the Jews by Trudi Alexy
The New Jewish Baby Book: Names, Ceremonies & Customs -- A Guide for Today's Families by Anita Diamant
Response to Modernity: A History of the Reform Movement in Judaism by Michael A. Meyer
Fewer