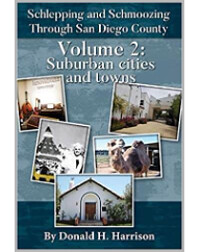 Volume II of Schlepping and Schmoozing Through San Diego County focuses on Jewish stories that author Donald H. Harrison has covered as a reporter and editor in the cities and towns surrounding San Diego. Culled from thousands of articles he has written since 1986 when he first started reporting on San Diego County's Jewish community, this book, along with Volume I about Jewish life in the City of San Diego, offers many stories providing fascinating historical background about key institutions and individuals in the county. Over his long journalistic career, Harrison wrote for the UCLA Daily Bruin, the Associated Press, and the San Diego Union before turning to Jewish journalism as an editor or contributing columnist for the San Diego Jewish Press-Heritage, San Diego Jewish Times, Journal of San Diego History, Western States Jewish History, and L'Chaim San Diego Magazine. He is the editor and co-publisher with his wife Nancy of San Diego Jewish World, an online daily news and feature publication accessible at www.sdjewishworld.com.… (more)