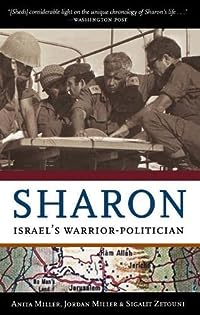 Ariel Sharon, Israel's former Prime Minister, was perhaps one of the most controversial public figures in the Mideast. He was born in 1928 in a moshav--an agricultural community in which, unlike a kibbutz, residents own their own property--and was raised by parents who were not only ardent Zionists but also rugged individualists. His father especially was contemptuous of socialism and believed in individual enterprise, raising his son to be self-reliant and physically strong in order to prepare him for the inevitable struggle to establish a Jewish state. Sharon was perhaps best known as the organizer of what was called Commando Unit 101 and for his original ideas for the training of commando forces, which he later adapted to the training of larger, more traditional armies. During his military career he personally led many raids into Arab territory and has been criticized for his role in the destruction, in 1953, of some forty Arab homes--which he insisted he thought were empty and in which sixty-nine Arabs died. Later, in 1982, he was blamed also for allowing the Lebanese Christian Militia into a Palestinian refugee camp in which hundreds were killed. His political career was of course indelibly colored by his military exploits. What made Sharon tick? What kind of a man was he? How did his childhood and early life condition him to become a brilliant commander, controversial soldier and an as-yet-untested leader of a small democracy which is divided both within and without? This first biography in English--frank, but balanced--will perhaps answer some of the questions raised by his career both as a soldier and politician.… (more)

Golda by Elinor Burkett
Diary of the Sinai Campaign by Moshe Dayan
Israel: A Personal History by David Ben-Gurion
Jewish Marital Status: A Hadassah Study by Carol Diament
My Life by Golda Meir
14 more
My Name is Rachamim by Jonathan P. Kendall
From Time Immemorial: The Origins of the Arab-Jewish Conflict Over Palestine by Joan Peters
Moshe Dayan: Story of My Life by Moshe Dayan
In the Name of Sorrow and Hope by Noa Ben Artzi-Pelossof
Your Jewish Lexicon: Some Words and Phrases in Jewish Life and Thought in Hebrew and English by Edith Samuel
The Complete Passover Cookbook by Frances R. AvRutick
Like Dreamers: The Story of the Israeli Paratroopers Who Reunited Jerusalem and Divided a Nation by Yossi Klein Halevi
The Israelis: Founders and Sons by Amos Elon
With All My Heart, With All My Mind: Thirteen Stories About Growing Up Jewish by Sandy Asher
Territory of Lies: The Exclusive Story of Jonathan Jay Pollard, the American Who Spied on His Country for Israel and How He Was Betrayed by Wolf Blitzer
Lightning Out of Israel: The Six-Day War in the Middle East by Associated Press.,
Standing with Israel by David Brog
Myths and Facts: A Guide to the Arab-Israeli Conflict by Mitchell G. Bard
Self-Portrait of a Hero: The Letters of Jonathan Netanyahu (1963-1976) by Yonatan Netanyahu
Fewer