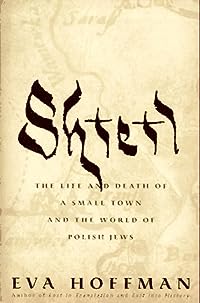 Shtetl: The Life and Death of a Small Town and the World of Polish Jews

In Shtetl (Yiddish for "small town"), critically-acclaimed author Eva Hoffman brings the lost world of Eastern European Jews back to vivid life, depicting its complex institutions and vibrant culture, its beliefs, social distinctions, and customs. Through the small town of Brafsk, she looks at the fascinating experiments in multicultural coexistence--still relevant to us today-- attempted in the eight centuries of Polish-Jewish history, and describes the forces which influenced Christian villagers' decisions to conceal or betray their Jewish neighbors in the dark period of the Holocaust.

LibraryThing member rondoctor
Good short history of the culture of the shtetl.
2 more
LibraryThing member jonfaith
Jake Pfau selected this book on samizdat and then never posted again. Forgive my snark, but it sucks being him. This book inspired some decent discussions and was appreciated by all. You still suck, Jake.
LibraryThing member SeriousGrace
Inspired by a documentary Hoffman saw on Frontline, this is the biography of Bransk, a Polish town that no longer exists thanks to the thoroughness of the Nazis under Russian rule. One of the most difficult segments to read was the recounting of young Bransk boys conscripted into the Russian army.
Show More
They were religiously converted away from their birthright and upon returning home, shunned by their own people.
As an aside, I am afraid of cult figures and the power they can wield over seemingly intelligent people. I was surprised to learn of a man in the 1750s by the name of Jakub Frank who claimed he was the Messiah. He wanted to rule all of Poland and had a strong sexual appetite for young girls and orgies.
Show Less
Fewer

Konin: A Quest by Theo Richmond
A Vanished World by Roman Vishniac
Life Is With People: The Culture of the Shtetl by Mark Zborowski
Atlas of the Holocaust by Martin Gilbert
Poyln: Jewish Life in the Old Country by Alter Kacyzne
14 more
The Abandonment of the Jews: America and the Holocaust, 1941-1945 by David S. Wyman
A Hole in the Heart of the World: Being Jewish in Eastern Europe by Jonathan Kaufman
The Shtetl: A Creative Anthology of Jewish Life in Eastern Europe by Joachim Neugroschel
The Golden Tradition: Jewish Life and Thought in Eastern Europe by Lucy S. Dawidowicz
World of Our Fathers: The Journey of the East European Jews to America and the Life They Found and Made by Irving Howe
The Jews of Lithuania: A History of a Remarkable Community, 1316-1945 by Masha Greenbaum
From Generation to Generation: How to Trace Your Jewish Genealogy and Personal History by Arthur Kurzweil
Denying the Holocaust: The Growing Assault on Truth and Memory by Deborah E. Lipstadt
They Fought Back: The Story of Jewish Resistance in Nazi Europe by Yuri Suhl
The Mezuzah in the Madonna's Foot: Oral Histories Exploring 500 Years in the Paradoxical Relationship of Spain and the Jews by Trudi Alexy
Children of the Holocaust: Conversations with Sons and Daughters of Survivors by Helen Epstein
The Atlas of Jewish History by Martin Gilbert
The Avengers: A Jewish War Story by Rich Cohen
Image Before My Eyes: A Photographic History of Jewish Life in Poland, 1864-1939 by Lucjan Dobroszycki
Fewer