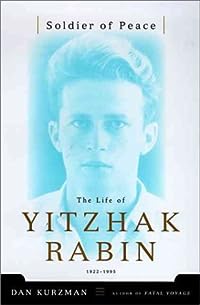 Soldier of peace: The Life of Yitzhak Rabin

The bestselling, award-winning author of Fatal Voyage and Gensis 1946 presents a comprehensive biography of Yitzhaz Rabin that will publish to tie in with the 50th anniversary of the founding of the state of Israel. In the mots revealing portrait of the late Israeli leader writer to date, and the first to examine Rabin's longtime secret contacts with the PLO, Rabin family friend, confidante, and former Washington Post correspondent Dan Kurzman explores the life and work of the former Israeli prime minister. Tracing Rabin's life from his youth as a member of an elite commando unit to his rise as leader of Israel, and the account of his brutal assassination at the hands of a right-wing Jewish extremist, Kurzman details Rabin's evolution from shy child to desert warrior to peacemaker, and in the process tells the story of a nation's maturation into a modern state striving for peace. Kurzman draws both on his relationship with Rabin, whom he first knew as a reporter's source during the Six Day War, and from interviews he conducted with more tan 200 people, including top politicians and statesmen from Shimon Peres to Henry Kissinger. It is the most complete portrait yet published of one of the twentieth century's most courageous and visionary statesman.… (more)

The Rabin Memoirs by Yitzhak Rabin
Killing a King: The Assassination of Yitzhak Rabin and the Remaking of Israel by Dan Ephron
Personal Witness: Israel Through My Eyes by Abba Solomon Eban
The Seventh Million: The Israelis and the Holocaust by Tom Segev
Ben-Gurion, Prophet of Fire by Dan Kurzman
18 more
Great Jewish Women by Elinor Slater
The Prime Ministers: An Intimate Narrative of Israeli Leadership by Yehuda Avner
Shalom, Haver: Goodbye, Friend by Barbara Sofer
Chaim Weizmann: A Biography by Norman Rose
Israel: A Personal History by David Ben-Gurion
Jewish Days: A Book of Jewish Life and Culture Around the Year by Francine Klagsbrun
Deborah, Golda, and Me: Being Female and Jewish in America by Letty Cottin Pogrebin
Great Jews in Sports by Robert Slater
The Jewish World: History and Culture of the Jewish People by Elie Kedourie
The Third Jewish Catalog: Creating Community by Sharon Strassfeld
To Jerusalem and Back: A Personal Account by Saul Bellow
In the Name of Sorrow and Hope by Noa Ben Artzi-Pelossof
The Atlas of Jewish History by Martin Gilbert
The Jews in Their Land by David Ben-Gurion
A Treasury of Jewish Humor: A Classic Collection of Humorous Stories, Satires and Witticism from the Rich Jewish Literature of All Times by Nathan Ausubel
The Israelis: Founders and Sons by Amos Elon
The Abandonment of the Jews: America and the Holocaust, 1941-1945 by David S. Wyman
The Writings: Kethubim (Ketuvim) A new translation of the Holy Scriptures according to the Masoretic text : third section
Fewer