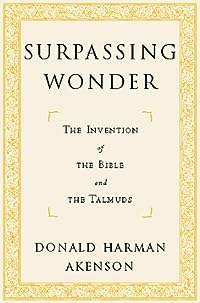 Surpassing Wonder: The Invention of the Bible and the Talmud

With biting irreverence for denominational prejudices and the pretensions of academics, Akenson renews our sense of awe before these religious works. He challenges received doctrines, arguing that the ancient Jews were indeed idol worshippers and that Saint Paul did not believe in the bodily resurrection of Jesus of Nazareth or in the virgin birth. With wit, elegance, and clarity Surpassing Wonder makes the ancient Hebrew scriptures, the Christian New Testament, and the Talmuds of the Rabbis accessible to all and shows they can be understood only in relation to each other and against their specific historical settings. Akenson argues that each of the great texts must be considered as the product of a single author and thus as a religious invention ? that is, as a self-consciously formed unity rather than an anthology of disparate works. He also argues that the great inventor of the Hebrew scriptures should be credited with constructing the very concept of narrative history and thus the foundations of Western civilization. Using a rich and imagistic language that combines tractor mechanics, Winnie-the-Pooh, and architecture with analogies from astronomy, evolutionary biology, and economics, Akenson brings about nothing less than a radical reformation of how to think about the sacred texts. He restores their spiritual power through a just appreciation of the achievement of their authors while leaving readers to decide for themselves on the presence of a "guiding hand." Surpassing Wonder is a penetrating study of the historian's craft and a brilliant exposé of how theologians and biblical scholars abuse historical reasoning and evidence in their treatment of the sacred texts. Just as a previous reformation cast out the priestly intercessors, so Akenson casts the scholars out of the temple and lets readers in to see the texts anew. In so doing he reinvests religion with meaning for a contemporary world and shows us how Western civilization was created not by the Greeks of Athens or the patricians of Rome but by the desert worshippers of Yahweh.… (more)

LibraryThing member paradoxosalpha
Akenson's book is a lively and substantial exploration of the process of religious canonization of texts in the Biblical tradition. The author is an historian by trade, and has no preexisting partisan status in the interminable feuds of biblical origins scholarship. In particular, he spurns the
Show More
entire "source critical" procedure of reifying postulated proto-texts, preferring to focus on the inseparable literary and ideological motives of the compiler/author(s) of the texts that we do have.

Akenson recognizes that the Temple scheme, along with its metaphoric precursors and its supplementary successors, is the core of the tradition: "a concentric architecture of holiness, one that is also a genealogy of legitimacy."

Although the word "invention" may be a little alarming to those who fear that the book will treat the Bible as fiction, it instead denotes the creative element in composing historical text, the divine creativity that was expressed in the human effort to contribute these texts to posterity. But Akenson neither coddles nor argues with Biblical inerrantists and their fundamentalist kindred. In his only condescension to acknowledge that intellectual position, he remarks: "This sort of thing cannot be fought, so it is best ignored."

There is a fairly happy amount of invention in Surpassing Wonder itself, and the reader may be swept up in the fascination of the meta-historical narrative to the point where there is an expectation for some grand resolution of the story. But all that Akenson offers in closing is some ecumenist sentiments regarding commonality between Jews and Christians. To my mind, a compelling "conclusion" would emphasize the journey, rather than a destination. There is no reason to suppose that what the author terms the "Re-Invention of the Species" of sacred literature has come to a halt. Some nods to the Quran and The Book of Mormon could demonstrate how the old foundations of Hebrew scripture continue to serve as a rule and guide in the development of texts which inscribe an ongoing relationship between the human and the divine.
Show Less
1 more
LibraryThing member stevenschroeder
Akenson describes Surpassing Wonder as a long love letter to Tanakh, the "New Testament," and the Talmuds. Readers are well advised to approach the book with something of a lover's patient indulgence: it is not a casual encounter. At the heart of Akenson's approach is a focus on texts, not sects.
Show More
Specifically, he details the formation of four sets of texts that lie behind two surviving offspring of the ancient Yahweh-faith, rabbinic Judaism and Christianity. He argues that the first nine books of Hebrew Scripture (using, he notes, "the Jewish, not the Christian arrangement of the scriptures and ignoring the early medieval division of both Samuel and Kings into double volumes") are a unified invention in the form of historical writing, the product of a single great mind, gifted at once as editor and writer, working between the beginning of the Babylonian exile and before the return to the Holy Land (mid-sixth century BCE). The formation of this text is associated with the triumph of "Judahist" religion (a term intended to distinguish the practice from both northern religious practice of the same period and from modern Judaism). Genesis-Kings, is the foundation upon which both Christianity and modern Judaism are built. There is a grammar of religious invention evident in the formation of this text that is applied with variations in formation of the other three sets of texts with which Akenson is concerned-those of Second Temple Judahism, the "New Testament," and the Talmuds. In this grammar, creativity is not acknowledged, new ideas and recent occurrences are presented as being old, and all is enfolded in historical narrative (even if, as in apocalyptic literature, the history is yet to occur). Based on careful reading of the Dead Sea Scrolls and the variety of the Qumran material, Akenson argues that there is no "normative" Second Temple Judaism. There is, instead, a breathtaking variety of texts, communities, and practicises in which Messianism is mostly peripheral. Akenson describes this period in three chapters as "Siloam's Teeming Pool," a creative ferment in which conditions were right for multiplication of religious life. The destruction of the Temple in the seventh decade of the Common Era entered this teeming pool like a lightning strike: suddenly, it was necessary to invent a Temple religion for a religion without a Temple. Akenson notes that this situation was not unprecedented. The invention of the Chosen People after the Babylonian Exile was a precursor, and both events illustrate the extent to which a common religious grammar made almost infinite inventive variation possible. Akenson proposes a heuristic device parallel to his inventor of Genesis-Kings, in this case an editor-inventor of the "New Testament," a reinvention of Tanakh in which Matthew-Acts is to Christian scripture what Genesis-Kings is to Hebrew. Modern Judaism, Akenson argues, arises out of the same lightning strike over a longer period of time. It initially abandons the historical narrative characteristic of Tanakh in favor of a legal document, the Mishnah, which is gradually tempered by narrative in the Babylonian Talmud. In the end, Akenson argues that modern Judaism and Christianity are sister religions, born out of the volatile mix of Second Temple Judahism, sole surviving children whose mother did not survive the destruction of the Temple. This argument is clearly motivated both by a passion for the texts and a concern for the relationship between two communities and two practices that have often been at odds. Akenson's passion for the texts translates into an eloquent plea to appreciate them as organic wholes rather than dissecting them with progressively sharper scholastic scalpels. This leads to running criticism of Biblical scholarship, including particular criticism of the Jesus Seminar that is expansive enough to require its own appendix. Akenson's concern for Jewish/Christian relationships translates into an extended discussion of the transformation of Anti-Judaism into Anti-Semitism (not unlike Dominic Crossan's discussion of the same theme in Who Killed Jesus?). The book is written for non-specialists, but it is not for a casual audience. Patient readers will be rewarded with a deeper understanding of the common textual roots of Christianity and modern Judaism as well as the close sibling relationship that has often deepened the historical struggle between the two communities.
Show Less
Fewer

The Mishnah a new translation by Jacob Neusner
Commentary on the Torah: A New English Translation by Richard Elliott Friedman
Zohar: The Book of Enlightenment by Daniel Chanan Matt
Introduction to the Talmud and Midrash by Hermann Leberecht Strack
Pirkei Avos: Ethics of the Fathers [Pirke Avot] = Ethics of the fathers : a new translation with a concise commentary anthrologized from the classical rabbinic sources by Meir Zlotowitz
4 more
Sayings of the Fathers: Pirke Avot The Hebrew text, with English translation and commentary by Joseph H. Hertz
The Book of Legends: Sefer Ha-Aggadah, Legends from the Talmud and Midrash by Hayyim Nahman Bialik
Everyman's Talmud: The Major Teachings of the Rabbinic Sages by A. Cohen
The Essential Talmud by Adin Steinsaltz
Fewer