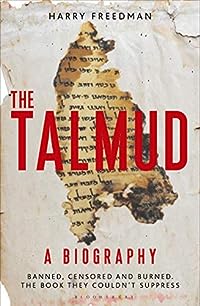 The Talmud: A Biography - Banned, Censored and Burned -- The Book They Couldn't Suppress

Containing nearly two million words in 37 volumes, the Talmud covers topics as diverse as law, faith, medicine, magic, ethics, sex, humour and prayer. It is a highly complex, profoundly logical and frequently impenetrable work with a history like no other. In its 1500 year history the Talmud has been banned, censored and burned, dissected by scholars and rabbis, probed by philosophers, poets, republicans and kings. In The Talmud - A Biography, Jewish scholar Harry Freedman tells the engrossing story of an ancient classic, the legal and mystical pillar of Judaism and recounts the story of a book which, in many ways, parallels the history of the Jewish people. From its origins as a record of discussions amongst scholars in towns and villages close to modern-day Baghdad, Freedman traces the spiraling paths of the Jewish diaspora and explores the story of the Talmud's early origins in Babylon, its role during the Enlightenment and its influence over traditional Judaism. A compelling fusion of law, storytelling and spirituality, the Talmud's story is a fascinating insight into the history of Judaism and Harry Freedman's The Talmud - A Biography is a remarkable account of one of the most important cultural, historical and religious works of our time.… (more)

Lincoln and the Jews: A History by Jonathan D. Sarna
The Essential Talmud by Adin Steinsaltz
Stones for Grandpa by Renee Londner
Rebbe: The Life and Teachings of Menachem M. Schneerson, the Most Influential Rabbi in Modern History by Joseph Telushkin
The Talmud for Beginners: Volume I - Prayer by Judith Z. Abrams
11 more
Aids to Talmud Study by Aryeh Carmell
The Bird of Paradise and Other Sabbath Stories by Steven M. Rosman
Parenting Jewish Teens: A Guide for the Perplexed by Joanne Doades
My Promised Land: The Triumph and Tragedy of Israel by Ari Shavit
Bubbe's Belated Bat Mitzvah by Isabel Pinson
Everyman's Talmud: The Major Teachings of the Rabbinic Sages by A. Cohen
A Year of Jewish Stories: 52 Tales for Children and Their Families by Grace Maisel
Embracing Judaism by Simcha Kling
A Bride for One Night: Talmud Tales by Ruth Calderon
The Service of the Heart: A Guide to the Jewish Prayer Book by Evelyn Garfiel
The Jewish Way: Living the Holidays by Irving Greenberg
Fewer