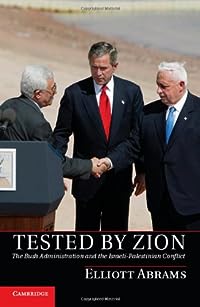 Tested By Zion the Bush administration and the Israeli-Palestinian conflict

This book tells the full inside story of the Bush Administration and the Israeli-Palestinian conflict. Written by a top National Security Council officer who worked at the White House with Bush, Cheney, and Rice and attended dozens of meetings with figures like Sharon, Mubarak, the kings of Jordan and Saudi Arabia, and Palestinian leaders, it brings the reader inside the White House and the palaces of Middle Eastern officials. How did 9/11 change American policy toward Arafat and Sharon's tough efforts against the Second Intifada? What influence did the Saudis have on President Bush? Did the American approach change when Arafat died? How did Sharon decide to get out of Gaza, and why did the peace negotiations fail? In the first book by an administration official to focus on Bush and the Middle East, Elliott Abrams brings the story of Bush, the Israelis, and the Palestinians to life.… (more)

Wall Street Journal
Policy, after all, is made by people whose talents and flaws are tied inextricably to how they understand the world and try to shape it--or pull it apart. As Mr. Abrams shows throughout this insightful book, institutions and bureaucracies are only part of the human equation.

Thirteen Days in September: Carter, Begin, and Sadat at Camp David by Lawrence Wright
Negotiating Arab-Israeli Peace: American Leadership in the Middle East by Daniel Kurtzer
The Missing Peace: The Inside Story of the Fight for Middle East Peace by Dennis Ross
Myths and Facts: A Guide to the Arab-Israeli Conflict by Mitchell G. Bard
The New Middle East by Shimon Peres