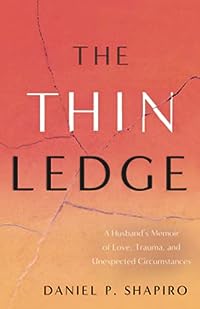 The Thin Ledge: A Husbands Memoir of Love, Trauma, and Unexpected Circumstances

What would you do if the person you love became someone else? In this profoundly honest memoir, Daniel P. Shapiro shares the reality of living through his wife's mental and physical decline caused by a devastating illness. Shapiro was a successful attorney in his early forties when his wife, Susan, suffered a brain bleed and a diagnosis that her future was uncertain. Stunned, and with three young children, the couple made the most of the few years that followed, before a massive second hemorrhage changed everything. Physically, Susan was badly compromised in her ability to speak, see, and walk. Mentally, she spiraled into depression and experienced a drastic personality change. The Thin Ledge is about coping (often unsuccessfully) with the wreckage left in the wake of an illness that destroys a loved one. Shapiro addresses the questions that people living through unspeakable tragedy may never mention, but almost always ask.… (more)