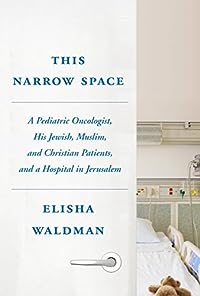 This Narrow Space: A Pediatric Oncologist, His Jewish, Muslim and Christian Patients and a Hospital in Jerusalem

In 2007, Elisha Waldman, a New York-based pediatric oncologist and palliative-care specialist in his mid-thirties, was offered his dream job- attending physician at Jerusalem's Hadassah Medical Center. He had gone to medical school in Israel and spent time there as a teenager; now he was going to give something back to the land he loved. But in the wake of a financial crisis at the hospital that left him feeling unsure about his future, Waldman, with considerable regret, left Hadassah in 2014 and returned to America. This Narrow Space is his deeply affecting and poignant memoir of the seven years he spent taking care of children-Israeli Jews, Muslims, and Christians; Palestinian Arabs from the West Bank and Gaza-with one devastating thing in common- they had all been diagnosed with some form of pediatric cancer. Waldman's years at Hadassah were filled in equal measure with a deep sense of accomplishment, with frustration when regional politics sometimes got in the way of his patients' care, and with tension over the fine line he would have to walk when the religious traditions of some of his patients' families made it difficult for him to give these children the care he felt they deserved. Navigating the baffling Israeli bureaucracy, the ever-present threat of war, and the cultural clashes that sometimes spilled over into his clinic, Waldman learned to be content with small victories- a young patient whose disease went into remission, brokenhearted parents whose final hours with their child were made meaningful and comforting. As he sought to create both a personal and a professional life in his new home, Waldman struggled with his own questions of identity and belief, and with the intractable conflict between Israelis and Palestinians that had become a fact of his daily life. What he learned about himself, about the complex country that he was now a part of, and about the heartbreakingly brave and endearing children he cared for-whether they were from Me'ah She'arim, Ramallah, or Gaza City-will move and challenge readers everywhere.… (more)

LibraryThing member bobbieharv
An American Jewish pediatric oncologist immigrates to Israel and practices in a hospital in Jerusalem, with both Arab and Israeli patients. Fascinating portrayal of both cultures, and his feeling of dislocation in both.

The Book of Separation: A Memoir by Tova Mirvis
Jerome Robbins: A Life in Dance (Jewish Lives) by Wendy Lesser
The New American Judaism: How Jews Practice Their Religion Today by Jack Wertheimer
The Seventh Day: Soldiers' Talk About the Six-Day War by Avraham Shapira
My Promised Land: The Triumph and Tragedy of Israel by Ari Shavit
5 more
The Lemon Tree: An Arab, a Jew, and the Heart of the Middle East by Sandy Tolan
From Beirut to Jerusalem by Thomas L. Friedman
The Jews in Their Land by David Ben-Gurion
Golda by Elinor Burkett
Eternal Life by Dara Horn
Fewer