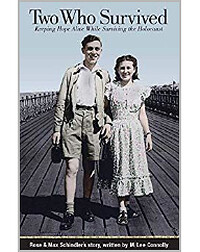 Two Who Survived: Keeping Hope Alive While Surviving the Holocaust

Two Who Survived chronicles the true story of two children from different worlds: a city boy and a country girl. When the persecution of Jews begins, both are plucked from their reality and thrust into concentration camps. They are stripped of everything they know and forced to navigate a truly incomprehensible, volatile, dangerous and unpredictable world. Even when separated from support systems and family members, their drive to survive helps them navigate. Despite their exposure to the horrors of the holocaust, they endure and carry on with a determination that shapes their character forever. Follow the lives of Max and Rose as they learn to adapt to a reality beyond belief and emerge stronger than ever. When they are finally liberated from their concentration camps, they navigate a new world individually before eventually coming together to form what each so tragically lost: a family. Bonus Track "The Chain" is an original short story by Holocaust Survivor Max Schindler, chronicling his wartime experiences as a slave laborer while hiding his father Benjamin Schindler's gold pocket watch chain throughout over 1,000 nights in 6 different concentration camps. "The Chain" was read into the California State Record on May 1, 2000 during the State Senate's year 2,000 Yom HaShoah commemoration, as resolution #153.… (more)