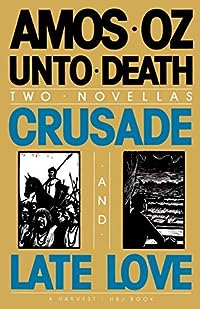 "Brilliant and insistent . . . The prose is sharp as a cameo, simple yet compelling, smoky, precise, lustrous, eerie." -- Boston Sunday Globe Here Amos Oz captures the atmosphere of hatred in which Jews have lived, died, and struggled for understanding. In Crusade, a band of soldiers journeys toward the Holy Land, killing any Jews they encounter; but soon the Crusaders face their own reckoning, as disease and deprivation take their toll. Late Love portrays an aged lecturer in modern Israel with paranoid visions of the destruction of his people at the hands of the Soviets. He is out of touch with a younger and saner generation, but knows they must be warned. "Powerfully written, with subtlety and flagrance delicately balanced." -- Austin American-Statesman… (more)

LibraryThing member ijon
Embarrassingly, I had never read any of Amos Oz's books until now. The other day, I randomly grabbed a re-issued pocket edition of a 1969 novella by Oz, called Unto Death: Chronicle of a Crusade (עד מוות) to take with me, as I was anticipating waiting in some line that day. I have finished it
Show More
(it is a mere 70 small pages) last night, and I am quite impressed. Oz's reputation is not unjustified; he crafts words quite beautifully, and his style is good.

It tells of a despondent French nobleman who decides the only thing to do is to go on a crusade to Jerusalem. He sets out with some fellow knights, slaves, and retainers, with neither map nor guidance. The novella depicts their journey across Europe, pillaging, raping, and murdering peasants and Jews along the way, while nightly praying for salvation, and growing increasingly frightened of a curse that they feel is upon them. Oz weaves an effective and engaging interplay of piety and depravity.

I think it affords several allegorical readings, but I haven't had time to formulate an interesting one yet. Do read it, it's excellent. It's been translated into quite a few languages, so those of you who can't read Hebrew are robbed of that excuse, at least.
Show Less
1 more
LibraryThing member suesbooks
I liked the writing in this book more than the content. The two stories were interesting, but did not possess the power of other Oz works.
Fewer

Two Tales: Betrothed & Edo and Enam by S.Y. Agnon
A Guest for the Night by Shmuel Yosef Agnon
Mr. Mani by Abraham B Yehoshua
In the land of Israel by Amos Oz
Five Seasons by Abraham B. Yehoshua
11 more
In My Father's Court: A Memoir by Isaac Bashevis Singer
Salvation by Sholem Asch
Fima by Amos Oz
To Jerusalem and Back: A Personal Account by Saul Bellow
A Journey to the End of the Millennium by Abraham B. Yehoshua
Requiem for Na'aman by Benjamin Tammuz
Days of Awe: A Treasury of Traditions, Legends and Learned Commentaries Concerning Rosh Ha-Shanah, Yo Kippur and the Days Between by Shmuel Yosef Agnon
A Late Divorce by Abraham B. Yehoshua
Altneuland: Old-New Land Old-new land by Theodor Herzl
The Third Jewish Catalog: Creating Community by Sharon Strassfeld
On Women and Judaism: A View from Tradition by Blu Greenberg
Fewer