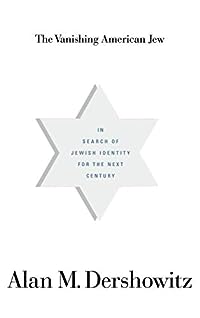 The Vanishing American Jew: In Search of Jewish Identity for the Next Century

In this urgent book, Alan M. Dershowitz shows why American Jews are in danger of disappearing - and what must be done now to create a renewed sense of Jewish identity for the next century. In previous times, the threats to Jewish survival were external - the virulent consequences of anti-Semitism. Now, however, in late-twentieth-century America, the danger has shifted. Jews today are more secure, more accepted, more assimilated, and more successful than ever before. They've dived into the melting pot - and they've achieved the American Dream. And that, according to Dershowitz, is precisely the problem. More than 50 percent of Jews will marry non-Jews, and their children will most often be raised as non-Jews. Which means, in the view of Dershowitz, that American Jews will vanish as a distinct cultural group sometime in the next century - unless they act now. Speaking to concerned Jews everywhere, Dershowitz calls for a new Jewish identity that focuses on the positive - the 3,500-year-old legacy of Jewish culture, values, and traditions. Dershowitz shows how this new Jewish identity can compete in America's open environment of opportunity and choice - and offers concrete proposals on how to instill it in the younger generation.… (more)

A Certain People: American Jews and Their Lives Today by Charles E. Silberman
Jew vs. Jew: The Struggle for the Soul of American Jewry by Samuel G. Freedman
Chutzpah by Alan M. Dershowitz
Where Are We? The Inner Life of America's Jews by Leonard J. Fein
The Jews in America: Four Centuries of an Uneasy Encounter by Arthur Hertzberg
22 more
How to Get More Out of Being Jewish even if you are not sure you believe in God, you think going to synagogue is a waste of time, you think keeping kosher is stupid, you hated Hebrew school, or all of the above by Gil Mann
Deborah, Golda, and Me: Being Female and Jewish in America by Letty Cottin Pogrebin
Teaching Your Children About God: A Modern Jewish Approach by David J. Wolpe
Jewish Renewal: A Path to Healing and Transformation by Michael Lerner
Stars of David: Prominent Jews Talk About Being Jewish by Abigail Pogrebin
The Precious Legacy: Judaic Treasures from the Czechoslovak State Collection by David A. Altshuler
Jewish and Female: Choices and Changes in Our Lives Today by Susan Weidman Schneider
Finding God: Ten Jewish Responses ten Jewish responses by Rifat Sonsino
The New Rabbi: A Congregation Searches For Its Leader by Stephen Fried
Great Jews in Sports by Robert Slater
The Purim Anthology by Philip Goodman
The Jews in America: The Roots, History, and Destiny of American Jews by Max I. Dimont
Putting God on the Guest List: How to Reclaim the Spiritual Meaning of Your Child's Bar or Bat Mitzvah by Jeffrey K. Salkin
The Jews in America by David Cohen
Gates of Mitzvah: A Guide to the Jewish Life Cycle by Simeon J. Maslin
A Jew Today by Elie Wiesel
The Third Jewish Catalog: Creating Community by Sharon Strassfeld
The New Jewish Wedding by Anita Diamant
A History of the Jewish Experience Book 1, Torah and history : Book 2, Torah, mitzvot, and Jewish thought by Leo Trepp
To Raise a Jewish Child: A Guide for Parents by Hayim Donin
Congregation: Contemporary Writers Read the Jewish Bible by David Rosenberg
Great Jewish Women by Elinor Slater
Fewer