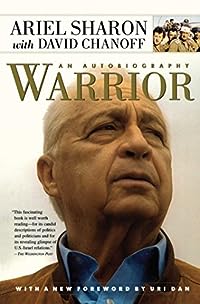 Israel's newest prime minister as of February 6, 2001, Ariel Sharon is a dynamic and controversial leader. A hero in Israel's wars, perhaps the most daring and successful commander in Israel's extraordinary military history, Sharon has always been a warrior, whether the enemies were hostile Arab nations, terrorists, Time magazine, or rival politicians. The public man is well known -- aggressive in battle, hard-line in politics -- but the private man has always been obscured by Sharon's dazzling career and powerful personality. In this compelling and dramatic auto-biography, the real Sharon appears for the first time: a complex man, a loving father, a figure of courage and compassion. He is a warrior who commands the respect and love of his troops, a visionary, and an uncompromising, ruthless pragmatist. Sharon tells his story with frankness, power, intelligence, and a brilliant gift for detail. Always controversial, he is as outspoken as his friends -- and enemies -- would expect him to be.… (more)

LibraryThing member nkrastx
One of the most controversial personalities of the 20th Century, the lion of Judah in his own words. His uncompromising belief in the defense of Israel and the Jewish people animates this autobiography. Critics and fans of Sharon alike should read this book, which spans virtually all of Israeli
Show More
history. Sharon was an eye-witness and participant in every major Arab-Israeli war starting with 1948. His view surely counts for something.
Show Less

Moshe Dayan: Story of My Life by Moshe Dayan
Personal Witness: Israel Through My Eyes by Abba Solomon Eban
A Certain People: American Jews and Their Lives Today by Charles E. Silberman
Bar-Kokhba: The Rediscovery of the Legendary Hero of the Second Jewish Revolt Against Rome by Yigael Yadin
Jewish and Female: Choices and Changes in Our Lives Today by Susan Weidman Schneider
18 more
Diary of the Sinai Campaign by Moshe Dayan
Abba Eban: An Autobiography by Abba Solomon Eban
My Life by Golda Meir
Sharon: The Life of a Leader by Gilad Sharon
Ben-Gurion, Prophet of Fire by Dan Kurzman
Self-Portrait of a Hero: The Letters of Jonathan Netanyahu (1963-1976) by Yonatan Netanyahu
My Country: The Story of Modern Israel by Abba Solomon Eban
Great Jewish Women by Elinor Slater
Chutzpah by Alan M. Dershowitz
The Vanishing American Jew: In Search of Jewish Identity for the Next Century by Alan M. Dershowitz
From These Men: Seven Founders of the State of Israel by Shimon Peres
The Jews in America by David Cohen
Jewish Humor: What the Best Jewish Jokes Say About the Jews by Joseph Telushkin
The Purim Anthology by Philip Goodman
The New Jewish Baby Book: Names, Ceremonies & Customs -- A Guide for Today's Families by Anita Diamant
The Precious Legacy: Judaic Treasures from the Czechoslovak State Collection by David A. Altshuler
I Seek My Brethren: Rescue, Relief and Reconstruction -- The Work of the American Jewish Joint Distribution Committee Ralph Goldman and "The Joint" by Tom Shachtman
The Jews in Their Land by David Ben-Gurion
Fewer