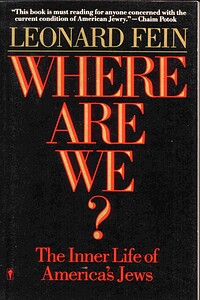 Where Are We? The Inner Life of America's Jews

There are, no doubt, other nations which experience one or more of the conditions which make Israel, first of all, an isolated country. But no other confronts them all: land borders shared entirely with unfriendly neighbors, across which no airplanes can fly, no letters be sent, no roads be built; a language spoken by no other people; a past, both within and outside the nation's borders, devoid of special ties to any other people; located in a region culturally alien as well as politically hostile. To these must be added the size of the country, for Israel's smallness -- eight thousand square miles, one-third the size of Lake Michigan, smaller than all but six of America's fifty states -- reinforces, intractably, its isolation. Nor is this splendid isolation Israel's only distinguishing quality. Alone among the nations of the world, most of its adult citizens were born elsewhere, and have come to the country with some part of their diverse native cultures still intact. Like its people, Israel's political institutions trace their roots to another time, and, in some measure, another place. The result is that Israel's quest for national identity must follow a lonely and pitted path; no trail has been blazed by others, no partners share the journey's perils. - Introduction. "New and comprehensive analysis of Israel's national development" - jacket.… (more)

A Certain People: American Jews and Their Lives Today by Charles E. Silberman
The Vanishing American Jew: In Search of Jewish Identity for the Next Century by Alan M. Dershowitz
The Jews in America: Four Centuries of an Uneasy Encounter by Arthur Hertzberg
Jewish and Female: Choices and Changes in Our Lives Today by Susan Weidman Schneider
Profiles in American Judaism: The Reform, Conservative, Orthodox, and Reconstructionist Traditions in Historical Perspective by Marc Lee Raphael
19 more
Does the World Need the Jews? Rethinking Chosenness and American Jewish Identity by Daniel Gordis
Jewish Renewal: A Path to Healing and Transformation by Michael Lerner
The American Jews: Portrait of a Split-Personality by James Yaffe
The Jews in America: The Roots, History, and Destiny of American Jews by Max I. Dimont
World of Our Fathers: The Journey of the East European Jews to America and the Life They Found and Made by Irving Howe
Sabbath: The Day of Delight by Abraham Ezra Millgram
Life Is With People: The Culture of the Shtetl by Mark Zborowski
The Grandees: America's Sephardic Elite by Stephen Birmingham
How We Lived: A Documentary History of Immigrant Jews in American, 1880-1930 by Irving Howe
The Precious Legacy: Judaic Treasures from the Czechoslovak State Collection by David A. Altshuler
Jew vs. Jew: The Struggle for the Soul of American Jewry by Samuel G. Freedman
Deborah, Golda, and Me: Being Female and Jewish in America by Letty Cottin Pogrebin
The Sukkot/Simhat Torah Anthology by Philip Goodman
Gates of Mitzvah: A Guide to the Jewish Life Cycle by Simeon J. Maslin
How to Get More Out of Being Jewish even if you are not sure you believe in God, you think going to synagogue is a waste of time, you think keeping kosher is stupid, you hated Hebrew school, or all of the above by Gil Mann
Great Jews in Sports by Robert Slater
The Jewish Family Book by Sharon Strassfeld
Mixed Blessings marriage between Jews and Christians by Paul Cowan
The Jews in America by David Cohen
Fewer