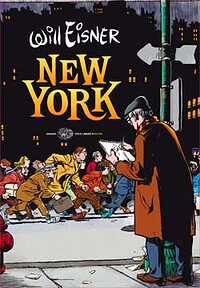 Will Eisner's New York: Life in the Big City

With an unparalleled eye for stories and expressive illustration, Will Eisner, the master and pioneer of American comics art, presents graphic fiction's greatest celebration of the Big Apple. No illustrator evoked the melancholy duskiness of New York City as expressively as Eisner, who knew the city from the bottom up. This new hardcover presents a quartet of graphic works (New York, The Building, City People Notebook, and Invisible People) and features what Neil Gaiman describes as "tales as brutal, as uncaring as the city itself." From ancient buildings "barnacled with laughter and stained with tears" to the subways, "humorless iron reptiles, clacking stupidly on a webbing of graceful steel rails," Will Eisner's New York includes cameo appearances by the author himself; several new illustrations sketched by Eisner, posthumously inked by Peter Poplaski; and three previously unpublished "out-takes"--a treasure for any Eisner fan, and sure to become a collectible. Introduction by Neil Gaiman.… (more)

---
Collection of various stories about New York and its inhabitants.
In the first part the protagonist is New York with its buildings and its culture to which the inhabitants mould themselves to obtain their purpose; it's a painting of the city, from what can be seen to sounds and smells.
The other stories have other protagonists, such as the regretful ones in "The palace" story or the invisibles who populate the most melancholic stories in the book.
It's a declaration of love to New York that is alive not because its inhabitants but because its interaction with them; the dynamics of the big city are instead convincing also applied to other cities.
Drawings, characters and settings are wonderful, this book demonstrates that a graphic novel to be compelling does not necessary need an imaginative element.

The Contract with God Trilogy: Life on Dropsie Avenue by Will Eisner
The Plot: The Secret Story of the Protocols of the Elders of Zion by Will Eisner
Berlin by Jason Lutes