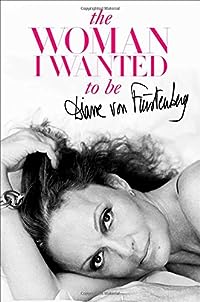 The Woman I Wanted to Be

One of the most influential, admired, and innovative women of our time: fashion designer, philanthropist, wife, mother, and grandmother, Diane von Furstenberg offers a book about becoming the woman she wanted to be. Diane von Furstenberg started out with a suitcase full of jersey dresses and an idea of who she wanted to be-in her words, "the kind of woman who is independent and who doesn't rely on a man to pay her bills." She has since become that woman, establishing herself as a global brand and a major force in the fashion industry, all the while raising a family and maintaining "my children are my greatest creation." In The Woman I Wanted to Be, von Furstenberg reflects on her extraordinary life-from childhood in Brussels to her days as a young, jet-set princess, to creating the dress that came to symbolise independence and power for an entire generation of women. With remarkable honesty and wisdom, von Furstenberg mines the rich territory of what it means to be a woman. She opens up about her family and career, overcoming cancer, building a global brand, and devoting herself to empowering other women, writing, "I want every woman to know that she can be the woman she wants to be."… (more)

LibraryThing member crashmyparty
Thank you to Simon & Schuster AU for providing this book in exchange for an honest review. This did not influence my review in any way.

I’ll be honest. I know nothing about fashion or make-up or beauty and I don’t really care about it either. But I requested The Woman I Wanted To Be because I
Show More
was interested in the woman behind DVF, who she was and who she wanted to be and what got her there. She has had an extraordinary life, that’s for sure.

Not an autobiography but rather a memoir, Diane von Furstenberg reflects in this book on her extraordinary life and on what is important to her. Who she is as a woman is discussed in terms of her ‘Roots’ and her early life in Belgium where she was influenced by her mother, a Holocaust survivor; her ‘Love’ and all the people across all walks of her life that she has loved and been loved by including the prince she married, her children and grandchildren and the love of her life Barry as well as a few others in between; and her ‘Beauty’, the women she has worked with and looked up to and what to her encapsulates beauty and elegance in women. She also takes us through her endeavours in the business world and the wrap dress that made her a millionaire before she was thirty. The book is not told in chronological order but rather focuses on those particular topics so we work backwards and forwards through her life, getting the picture of a strong, independent woman who was not always perfect but was always real.

What I got from The Woman I Wanted To Be was a strong sense of who Diane von Furstenberg is and how she got to be that way. From a young age her mother instilled in her the virtues of being confident, independent and self-reliant, so when Diane married Prince Egon she didn’t lie back and roll around in the money – instead she worked hard and created a product and a name for herself. She supported herself and became successful in her own right so that when the marriage broke down, she was financially independent. She knew how to survive on her own because of her upbringing and the values she herself had developed. She knew who she was outside of men and what she did in the seventies, when the fashion business was dominated by men, was create something powerful that was more than just fashion. Now you can see why I enjoyed reading this so much.

Of course, along the way Diane has made mistakes both in the running of her businesses and her personal life. She always sees the good in everything and has made the bad situations in her life work for her. I admire that even when I was thinking, as if instead she was a fictional character, “what are you doing? Don’t you know you should be with Barry?” But as a strong, independent woman she had to work things out for herself. There was a fair bit of name dropping, which I could sense even when I didn’t know all the names but it was, I begrudgingly admit, interesting to read about her journey through the fashion and celebrity worlds as an icon.

DVF is certainly an intriguing, powerful woman who I think today’s young women could learn a lot from. I loved her take on modelling and how she believes they should dance down the catwalk and look like they’re having fun (I think that too! Why are they all so sullen, they look ridiculous). You can tell just how important love and life is to her, as is empowering young women to be the best they can be. “Don’t be models!” she tells them and instead encourages them to go out and discover the women they want to be. I felt empowered just by reading what she could achieve – I don’t even have an interest in fashion!

Despite my non-interest in fashion I did Google DVF dresses – WOW! They are like upwards of $300! No wonder she’s a millionaire!

Show Less
1 more
LibraryThing member cygnet81
Interesting story although not easy to use as a role model.
Fewer

IM: A Memoir by Isaac Mizrahi
Still Foolin' 'Em: Where I've Been, Where I'm Going, and Where the Hell Are My Keys? by Billy Crystal