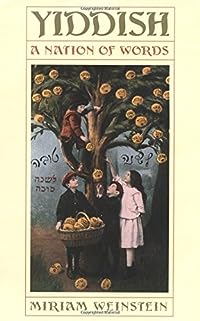 Yiddish: A Nation of Words

This first-ever popular history of Yiddish is so full of life that it reads like a biography of the language. For a thousand years Yiddish was the glue that held a people together. Through the intimacies of daily use, it linked European Jews with their heroic past, their spiritual universe, their increasingly far-flung relations. In it they produced one of the world's most richly human cultures. Impoverished and disenfranchised in the eyes of the world, Yiddish-speakers created their own alternate reality - wealthy in appreciation of the varieties of human behavior, spendthrift in humor, brilliantly inventive in maintaining and strengthening community. For a people of exile, the language took the place of a nation. The written and spoken word formed the Yiddishland that never came to be. Words were army, university, city-state, territory. They were a people's home. The tale, which has never before been told, is nothing short of miraculous - the saving of a people through speech. It ranges far beyond Europe, from North America to Israel to the Russian-Chinese border, and from the end of the first millenium to the present day. This book requires no previous knowledge of Yiddish or of Jewish history - just a curious mind and an open heart.… (more)

Poyln: Jewish Life in the Old Country by Alter Kacyzne
Great Jewish Women by Elinor Slater
The Shtetl: A Creative Anthology of Jewish Life in Eastern Europe by Joachim Neugroschel
Jewish Renewal: A Path to Healing and Transformation by Michael Lerner
Jew vs. Jew: The Struggle for the Soul of American Jewry by Samuel G. Freedman
18 more
How to Get More Out of Being Jewish even if you are not sure you believe in God, you think going to synagogue is a waste of time, you think keeping kosher is stupid, you hated Hebrew school, or all of the above by Gil Mann
Jewish and Female: Choices and Changes in Our Lives Today by Susan Weidman Schneider
Life Is With People: The Culture of the Shtetl by Mark Zborowski
Amerikanisher Briefen-Shteler: American Letter Writer by Alexander Harkavy
Mingled Roots: A Guide for Jewish Grandparents of Interfaith Grandchildren by Sunie Levin
The Jews in America: The Roots, History, and Destiny of American Jews by Max I. Dimont
A Vanished World by Roman Vishniac
World of Our Fathers: The Journey of the East European Jews to America and the Life They Found and Made by Irving Howe
Deborah, Golda, and Me: Being Female and Jewish in America by Letty Cottin Pogrebin
Yiddish Folktales by Beatrice Weinreich
The Jews: A Treasury of Art and Literature by Sharon R. Keller
Born to Kvetch: Yiddish Language and Culture in All Its Moods by Michael Wex
The Dybbuk by S. An-Ski
Congregation: Contemporary Writers Read the Jewish Bible by David Rosenberg
The Jews in Their Land by David Ben-Gurion
I am Jewish: Personal Reflections Inspired by the Last Words of Daniel Pearl by Judea Pearl
Great Jews in Sports by Robert Slater
The Golden Tradition: Jewish Life and Thought in Eastern Europe by Lucy S. Dawidowicz
Fewer