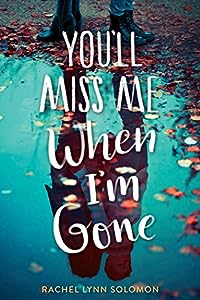 You'll Miss Me When I'm Gone

Eighteen-year-old twins Adina and Tovah have little in common besides their ambitious nature. Viola prodigy Adina yearns to become a soloist--and to convince her music teacher he wants her the way she wants him. Overachiever Tovah awaits her acceptance to Johns Hopkins, the first step on her path toward med school and a career as a surgeon. But one thing could wreck their carefully planned futures: a genetic test for Huntington's, a rare degenerative disease that slowly steals control of the body and mind. It's turned their Israeli mother into a near stranger and fractured the sisters' own bond in ways they'll never admit. While Tovah finds comfort in their Jewish religion, Adina rebels against its rules. When the results come in, one twin tests negative for Huntington's. The other tests positive. These opposite outcomes push them farther apart as they wrestle with guilt, betrayal, and the unexpected thrill of first love. How can they repair their relationship, and is it even worth saving? From debut author Rachel Lynn Solomon comes a luminous, heartbreaking tale of life, death, and the fragile bond between sisters. "Heartfelt, deeply moving." --Buzzfeed "Dark and thought-provoking." --Publishers Weekly "A stunning debut." --VOYA… (more)

LibraryThing member Susan.Macura
This is an interesting young adult book where fraternal twins Adina and Tovah come to terms not only with their mother's declining health due to Huntington's Disease, an inherited and fatal condition, but with the potential that they could also develop the disease. When they turn 18, they both are
Show More
tested, with different results. Their relationship had already been strained, but this diagnosis widens these rifts. This is an compelling look at family dynamics made worse with illness, both in the present and in the future.
Show Less
2 more
LibraryThing member RobynReo
Adina and Tovah Seigel are fraternal twins about to turn eighteen years old. Eighteen is supposed to be a lucky number in Hebrew, but to the twins the number eighteen is anything but lucky. In fact, it is quite the opposite. Turning eighteen means they can now take the genetic test to find out if
Show More
either one of them inherited their mother’s gene for Huntington’s Disease. When one sister’s test comes back positive and the other sister negative, it impacts their lives in different ways.

Adina and Tovah do not have the best of relationships. At one time they were very close, but they had a falling out. Now, with the test results they both try to put the past behind them and start anew. They both have a lot of issues they need to work through and their relationship is shaky at best. Like all sibling relationships, there will always be arguments and times where you will not get along. You can see that with Adina and Tovah. I can see that with my own sisters. We fight and make up and fight and make up again. Adina and Tovah’s relationship is realistically portrayed. Are they both likeable? Yes and no. They were both flawed and complex characters. They both have moments where you either love or hate what they are doing.

Outside influences also made me see the sisters in a different light. Adina is in love with her viola tutor who is a few years older than her whereas, Tovah likes a boy from her school. The boy/girl relationship dynamic between the two sisters was so different. Adina is the siren and she uses her looks to get what she wants. Although realistic, it really made me feel sorry for Adina that she had to use her looks and sexuality to get the guy that she wants. Tovah, on the other hand, is inexperienced and never had a boyfriend. She is uncomfortable in her own skin and dresses the part to hide her body. In this instance, I felt I could relate more with Tovah as she seemed the more down to earth sister. Both relationships were so different and one of them even toxic.

Since the genetic test results have come in both sisters have to come to terms for what this means and how it is going to impact both of their lives. The both see what their mother is going through and as a whole how it is impacting their family. Huntington’s Disease is a genetic disease that affects the brain’s neurons. Symptoms usually occur in your forties and fifties, but can occur even earlier. Imagine living with this fear of not knowing when your own body and mind will betray you….of not being able to function…of dropping things, having mood swings, stumbling and eventually not even being able to take care of yourself. I can only imagine what that would feel like to know in ten or twenty years or maybe even sooner my life is going to change and not for the better. You can see the turmoil both Adina and Tovah experience because of these results. How guilty one must feel to know their sibling was not spared. How their life is going to continue while their sibling worries about every time they drop a plate or stumble and if it a sign of early symptoms progressing.

There is one aspect that I really loved that the author, Rachel Lynn Solomon, took a huge risk on and that is thoughts of suicide. Honestly, it was beautifully done and so real. I am so glad the thought of suicide was not left out because it is an emotion some people think about especially when they are sick or know they are going to die. It is a really hot topic and not everyone will agree with the right to die. Personally, I would never want to be a burden to my family and if I had a disease like Huntington’s at some point I would hope my state had the option for assisted suicide. I think you should be able to live your life the way you want to and be able to die on your own terms. Again, this is just my opinion. I accept that not everyone will agree with me. I also know this topic can be a trigger for some. So, this is the only warning I have for this story. Just know, it is realistically portrayed.

Religion is also at the forefront of the story. They are both immersed into their culture, being of Israeli background. Faith is an underlying current throughout their story. I felt that I learned quite a bit about being Jewish without it being shoved down my throat. You also see how both Adina and Tovah practice or not practice their faith in Judaism. Both sisters have different views on religion and how they want to live their life devoted or not so devoted to God. How they both relate to their Jewish Identity was just fascinating.

I am so surprised that I’LL MISS YOU WHEN I AM GONE is a debut novel. It just feels like Rachel Lynn Solomon has all these great books behind her and she knows how awesome she is as a writer. I mean she is a fantastic writer regardless, but for a debut novel to be this great, to pull you right into the story and make you fall in love with all of the characters and to take on such a heavy and emotional heart wrenching topic is nothing more than phenomenal. What an outstanding debut! I can not praise this story enough. I am really looking forward for more books/stories from this author.
Show Less
LibraryThing member SimplyKelina
I am not a huge fan of Morgan Matson, but so many people have this book in their top reads of last year. I actually tried picking this up several times, and I could not get past the first chapter. I was finally in the mood to give it another try.

Based on Andie’s family, it was not realistic to
Show More
think she would become a dog walker. Her father (regardless if there was a scandal going on or not) would have used his connections to help her get into the camp or find her a summer job. I started to make a little more sense when you find out she never even told her dad what happened right away.

I was surprised when Andie and Clark did not have a great first date. It was refreshing! Everything you read always has insta-love, so I liked that the romance was not perfect right away.

I did not like how Andie treated her father in the beginning. I did enjoy seeing them come together and begin healing from the loss of Andie’s mother. There were some emotional moments which hit me a little harder since I lost my father at a young age.

Overall, I was surprised with this. I enjoyed it much more than I thought I would.
Show Less
Fewer